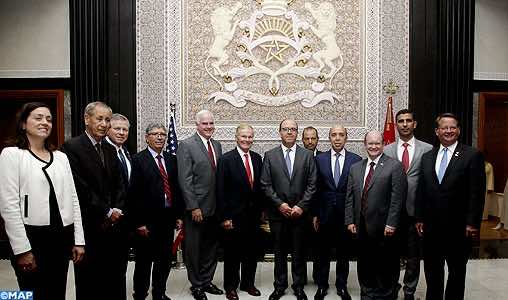 On this occasion, Benchamach praised the unchanged positions of the United States regarding their support for efforts to find a peaceful, lasting and mutually acceptable solution to the Sahara issue, recalling that Washington considers the autonomy plan presented by Morocco as a serious, realistic and credible proposal, said a statement by the House of Advisors (upper house).

In this regard, Benchamach stressed that the strategic partnership requires ongoing dialogue and assessment in the coordination of stances on issues of common interest.

The Moroccan party also highlighted the specificities of the Moroccan democratic development model under the leadership of HM King Mohammed VI in a troubled region, referring to the growing security challenges in the Sahel and Sahara following the upsurge of illegal migration, organized crime and terrorist groups that pose a real threat to the security and stability of the region.

For their part, the US delegation commended the leadership of HM the King in promoting human development as part of the “Millennium Development Goals” cooperation program.