Kuala Lumpur - Chief Secretary to the Government of Malaysia, Ali Hamza, expressed, Tuesday in Kuala Lumpur, the willingness of his country to work together with Morocco to improve the quality of public services to meet the challenges of the 21st century. 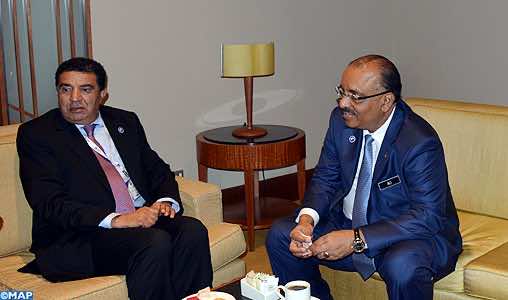 Kuala Lumpur – Chief Secretary to the Government of Malaysia, Ali Hamza, expressed, Tuesday in Kuala Lumpur, the willingness of his country to work together with Morocco to improve the quality of public services to meet the challenges of the 21st century.

Morocco and Malaysia have launched several programs to develop the administration and public services enabling both countries to lay the foundations for effective cooperation in this field, Hamza told MAP following his meeting with Minister Delegate to the Head of Government for Civil Service and Modernization of Public and Administrative, Mohamed Moubdii, who represents Morocco at the International Conference on Blue Ocean Strategy.

The imminent adherence of Morocco to the agreements signed between the countries of the Association of Southeast Asian Nations (ASEAN) is a boon for countries in the region, including Malaysia, to help promote bilateral cooperation to meet the challenges of the future, he said.

For his part, Moubdii praised the efforts of Malaysia to build a unique development model that piques the interest of experts, particularly in terms of the implementation of the Blue Ocean strategy, a new approach that encourages innovation.

He also highlighted Morocco’s efforts, under the leadership of HM the King, to build the institutions of a modern state and to create a favorable climate for innovation.

Moubdii cited several programs and projects that are meant to modernize the administration and develop the public service, notably the reform of the general status of the civil service, the reform pension, and the national strategy to fight corruption