Rabat - At a time when it has become quite ordinary to see pictures of dead bodies and ravaged homes in Syria, a young boy emerges from under the wreckage of his stricken home to remind us that the calamity in Syria must end. 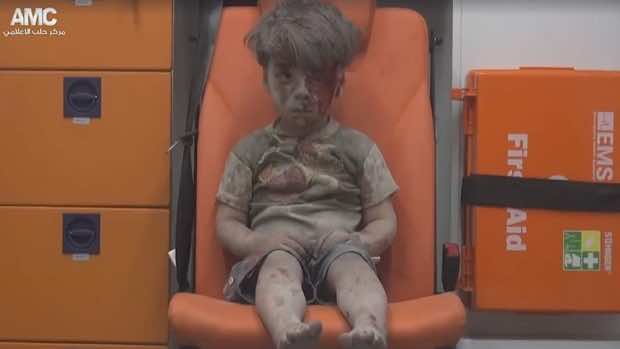 Rabat – At a time when it has become quite ordinary to see pictures of dead bodies and ravaged homes in Syria, a young boy emerges from under the wreckage of his stricken home to remind us that the calamity in Syria must end.

Five-year-old Omran Daqneesh was evacuated from under the debris of his home in Aleppo and placed on a chair inside of an ambulance.

The boy’s hand wrapped around his rescuer’s shoulder with an unexpected stillness. Amid the clamor of the rescuers, he sits calmly in the chair where the rescuers put him, and there he remains looking at the camera in a blank, yet telling, expression on his face.

Cameras focus on Omran’s face as soon as the man who rescued him grabs a walkie-talkie and leaves to find other survivors.

There he sits. Dust and blood overlie his face as he stares blankly at the camera. The boy’s tiny hands lay balanced on his lap. Calmly, he wipes the blood that obscures his vision and runs his hand through his hair. He then looks at his hands and the sight of the blood wiped out from his face does not interrupt the tranquility of his temperament.

Suddenly, a boy and girl covered in dust and blood are put in the ambulance with Omran. They too do not move, speak, or cry like duplicates of Omran.

The scene, which was originally shared by Aleppo Media Center, brings about utmost heartache and dejection. Social media users have extensively shared videos and pictures of Omran and expressed their sadness at the scene and their denunciation of the Russian intervention and their alliance with the tyrant, Bashar Al-Assad against the Syrian people.

The hashtag “Omran From Under the Wreckage” (in Arabic) has swept Twitter and became one of the website’s most trending hashtags in such as short time.

On Facebook, the hashtag has equally gone viral and has been associated with a catch-phrase that first appeared on Al Jazeera:

“He wiped out the blood from his forehead, and came back to tell the story of death that piles up on the heads of Syrian children.”