Tetouan - King Mohammed VI on Saturday called on Moroccans living abroad to remain firmly committed to their religious values and to their time-honored traditions as they face up to the extremist and terrorist phenomenon which has nothing to do with their culture or background. 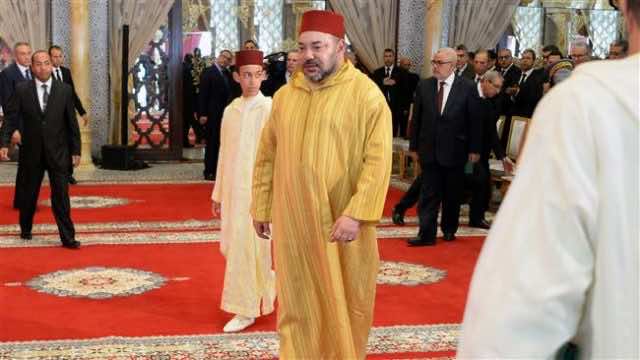 Tetouan – King Mohammed VI on Saturday called on Moroccans living abroad to remain firmly committed to their religious values and to their time-honored traditions as they face up to the extremist and terrorist phenomenon which has nothing to do with their culture or background.

“I also urge them to maintain their good reputation, to show forbearance in these trying circumstances, to close ranks and to be, as always, staunch advocates of peace, concord and co-existence in their country of residence,” the Sovereign underlined in a speech to the Nation on the 63rd anniversary of the Revolution of the King and the People.

“I realize how difficult the situation is for them. They suffer from the distortion of the image of Islam; they also suffer from terrorist attacks, which have already claimed the lives of many of them,” the King stressed, adding that the Moroccans living abroad also suffer from the backlash of terrorist activities and from accusations levelled against them, by some, because of their faith.

For the Monarch, those who engage in terrorism, in the name of Islam, “are not Muslims. Their only link to Islam is the pretexts they use to justify their crimes and their folly. They have strayed from the right path, and their fate is to dwell forever in hell”.

The King stressed that “those who call for murder and aggression, those who excommunicate people without a legitimate reason, those who interpret the Quran and the Sunnah to suit their purposes, are actually lying to Allah and His Messenger.”

Terrorists take advantage of some young Muslims – particularly in Europe – and of their ignorance of the Arabic language and of true Islam, to spread their distorted messages and misleading promises, the Sovereign said, adding that terrorists and extremists use all means to convince young people to join them in order to attack societies profoundly committed to the ideals of freedom, openness and tolerance.

“Moreover, several Muslim groups and societies perceive themselves as authorities on Islam, arguing that they represent true Islam – which implies others do not. In reality, however, they could not be further from Islam and its tolerant values”, the Monarch noted, underlining that such attitudes encourage the spread of the extremist ideology, of excommunication and terrorism.

Terror advocates believe that this is the path to true Islam, the Monarch said, pointing out that these people need to take a hard look at themselves and decide to what extent they are responsible for the crimes and human tragedies perpetrated in the name of Islam.

“All of us are targets. Whoever thinks or believes in what I have just said is a target of terrorism. That scourge hit Morocco in the past, then it struck in Europe and in many parts of the world”, HM the King warned.

The King called on Muslims, Christians and Jews to close ranks in order to tackle all forms of extremism, hatred and reclusiveness.

As attested by the history of mankind, it is impossible to achieve progress in a society which is plagued by radicalism and hatred, for the latter are the main ingredients of insecurity and instability, the Monarch said.

“There are countless examples, in human civilization, of success stories which show that religious interaction and coexistence produce open societies in which love, harmony and prosperity prevail,” the King said.

This was also illustrated by the Islamic civilization, especially in Baghdad and Andalusia, which were among the greatest, most open civilizations of mankind, the Sovereign added.