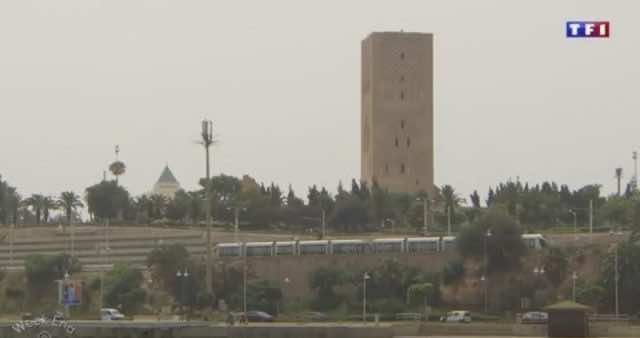 The program, Weekend, which is presented by French journalist Samira El Gadir, takes the viewer on a tour of the twin cities of Rabat and Salé.

In a bird’s eye view, the presenter starts her sketch of the city of Rabat by counting the newly established areas and attractions. “With around 400 million euros used in the construction of the city […] the Moroccan capital has made a leap into modernity,” the presenter says.

On a tramway tour around the city, the Director of Communication in the Moroccan National Office of Tourism, Rabia Talhimat, explained that Rabat “has always been only a crossing point during imperial times, therefore people knew other cities better, such as Fez and Marrakech,” indicating that efforts are being made to spotlight the Moroccan capital.

The French journalist then takes her viewers to is the Contemporary Arts Museum, highlighting its first class expositions, including the works of Giacometti. From the museum, the presenter heads to the medieval fortification known as Mohamed V Mausoleum “where the grandfather of the present king is buried.” She explained that the attraction is a UNESCO World Heritage Site.

“This is what we don’t know, Rabat is a busy modern city as we have seen but it’s a city with stunning cultural heritage,” she continued.

The 12th century edifice and many shops of the Oudayas Gardens also seem to stun the presenter. At the Street of Consuls, Nabil Rahmouni, an architect and urban planner, explains the areas historical significance.

After purchasing a customized gemstone-and-silver wristband from a jeweler in the market at only 15 euros, the presented crossed to Rabat’s twin city, Salé, via boat.

“Although not quite famous among visitors, it is here where hides a treasure of architecture,” the French journalist notes prior to visiting 14th century school.

As the TV program aims to spotlight touristic attractions that all viewers can afford, the reporter noted that prices in Salé are much lower compared to Rabat. This is the reason she decides to spend the night in Thamayna Riad at the heart of the city.

Chella Necropolis is the last monument the program focuses attention on.  The reporter expresses her appreciation of the site “where the Roman ruins lay side-by-side with the tomb of a 14th century sultan.”

At the end, the presenter reveals that her expenses for the whole weekend did not exceed 100 Euros.