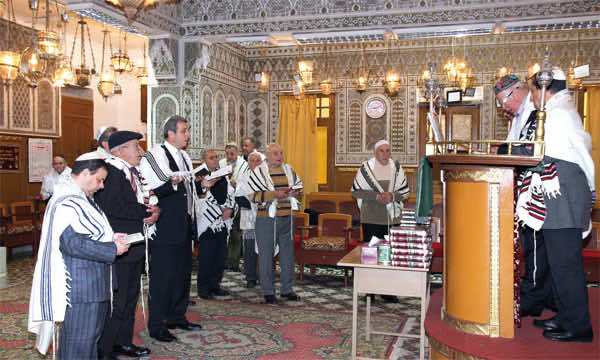 Marrakech – We know that the Jewish community has always been a prominent aspect of Moroccan history but how big of an influence were we on their history.

Since the beginning of time the Jewish community have been dispersed all around the world and a percentage of them made Morocco their home.

Before the founding of Israel in 1948, Morocco had the largest population of Jews in the Muslim world. Even before the conquest of the Idrisids in Morocco in 703, the Jewish community has been a prominent part of Moroccan society. During the Arab conquest of the Idrisids the Jews helped pave the way for the spread of Islam in Moroccan regions. Since Judaism is similar to Islam, the people in the Berber areas found it easier to accept the Muslim message hence causing them to convert either from their pagan beliefs or Judaism itself. Later on in 788, Morocco gained its independence from the caliphate which in turn made the Jews a minority, as a result of this, they were forced to join the army.

When Idris II came to power, he established Fes as the capitol and authorized Jews of all origins to settle there. The city flourished and was filled with Jewish scholars and merchants. Although later many Jews moved to Spain, the Jews in Morocco still flourished even under the reign of the Almoravide. Scholars such as Meir ibn Kamniel and Solomon Ab?ab Mu?allim in Marrakesh, were of Spanish origin; one from Seville and the other from Saragossa. Both were distinguished Torah scholars. It is obvious that the most successful period for the Jewish Moroccan community- from both the spiritual and intellectual point of view- was during the reign of the Idrisids and their successors.

From 1375 the Muslim world of the West clearly entered its period of decline. The Jews of Morocco were more affected by this development because, unlike in Algeria, there was no revival due to the arrival of important Jewish personalities fleeing from the Spanish persecutions of 1391. The Jews who came to Morocco during this period were mainly of average intellect; moreover, just like their native brothers, they encountered the zeal which had been introduced among the Muslim masses by the mediums, who had then founded ‘the Marabout movement’. This movement eroded the authority of the last Merinid sovereigns, and a serious deterioration in the condition of the Jews ensued. In 1438 the Jews of Fez were enclosed within a special quarter, the first Moroccan Mellahs.

The road to Morocco was walked again on a much larger scale in 1492 when Queen Isabella and King Ferdinand of Spain declared the Edict of the Expulsion of Jews. The Jewish chroniclers were undisputed in their description of the welcome accorded by the sultan Muhammad al-Shaykh al-Wattassi to the Spanish and Portuguese refugees (megorashim) in 1492 and 1496. Bands of robbers, however, attacked the numerous Jews on the roads to Fez. Once they arrived there, they found a lack of accommodation and camped in the surrounding fields. About 20,000 of them died as a result of disasters, famine and diseases.

The newcomers (megorashim) were generally unwelcomed and treated badly. They were considered outsiders, even alien at times. However, they later on established their dominance and position and made Fez their spiritual capital. For the following 450 years these newcomers separated themselves by worshiping in their own synagogues and following their own rituals. They even had their own language which was a mixture of Hebrew, Spanish and Arabic dialect. The native Jews adopted the newcomer’s way of life.

At the beginning of the 16th century, Portugal occupied some of the Moroccan coast on the shores of the Atlantic. Communities of megorashim had settled in ports such as Azemmour and Safi. Due to their excellence in trade and merchandizing, during the 16th and 17th century, Morocco became the leading producer of the world’s best sugar.

Moroccan Jews excelled in a variety of professions. In certain regions there were farmers and cattle breeders; in general, however, they were mostly craftsmen, small tradesmen, peddlers, and at times moneylenders. Some industries, such as that of beeswax, the trading of rubber and ostrich feathers were exclusively concentrated in the hands of the Jews. For religious reasons, the Muslims surrendered the arts of craftsmanship and trade of precious metals as well as the making of wine and its sale to them.

Until 1912, the majority of the maritime trade was controlled by a closed society of Jewish merchants. Businesses were passed down from father to son, some of them were court bankers or high officials. The reputation they gained led to European countries entrusting them with their interests and they often represented them before the sultan, hence obtaining the title of “merchants of the sultan.”

They had protégés over a large number of products, and held a monopoly over certain ports or took them in lease; however the majority of the Jewish population, suffered from poverty. The droughts which led to famine and the excessive taxes which were temporarily imposed on the communities from the 16th to the middle of the 18th century were the main cause of their poverty. Nevertheless, the misfortunes of one community did not affect the others. It became a common occurrence that while Jews died of hunger in Fez or were persecuted in Meknès, prosperity reigned in the Mellahs of Marrakesh and Jews ruled the town of Debdou.

During the 18th century, following the death of Moulay Ismail, the Jews were impoverished due to the imposed taxation in attempt to westernize Morocco. The Jewish villagers started to move to the urban centers changed the aspect of respectable Mellahs. The tree quarters of well-maintained Mellahs were transformed into slums and Jews started to flee and most sunk into poverty. Slowly the remaining Jews living in interior cities opted for port areas such as Safi and Rabat; furthermore, Marrakesh replaced Fez and Meknès as rabbinical centers. After this financial crisis, the next reigning sultan, Moulay Muhammad b. Abdallah, established security with the assistance of Jewish and Christian financial circles, an era of prosperity unknown in the north of the country reigned there. The community of Safi took over the leading place in the foreign trade of Morocco, while Agadir attained monopoly over the trading with the Sahara. These roles later became the privilege of the community of Essaouira, which was founded in 1764.

The operations of the big Jewish merchants in Morocco began to expand. Sugar production and trade were almost entirely focused in the hands of Jews. Commercial operations reached the ports of the eastern coast of the United States at the end of the 18th century. From the reign of Sidi Muhammad Ben-Abdallah (1757–90) down to the end of the 19th century, it was usually Jews who acted as representatives for the European Powers in Morocco. During the 19th century, they were much more prosperous; with new monarch Moulay Suleiman, violence was looked down upon. Not only that, but with the French Protectorate on 1912, the Jews had more power and monopoly over certain businesses.

Fast forward to the outbreak of World War II in 1939, the German occupation of France in 1940, and the establishment of the Vichy government rendered the Jews of Morocco (Morocco at the time was under France’s rule) powerless. In 1940, Nazi-controlled Vichy government issued decrees excluding Jews from public functions. Morocco was forced to issue these laws under France’s control and the Jews who sought sanctuary in Morocco were forced into labor camps. Morocco was not able to defy these laws until the fall of Vichy France with the help of Charles de Gaulle. After the establishment of Israel, the majority of Moroccan Jews moved there. Nowadays, the Jewish community still has an impact on our modern history as the adviser of our current king, Mohammed VI, is Andre Azoulay.