Hangzhou - The United States and China have formally ratified the Paris agreement to curb climate change in a joint announcement Saturday ahead of the G20 summit in Hangzhou. 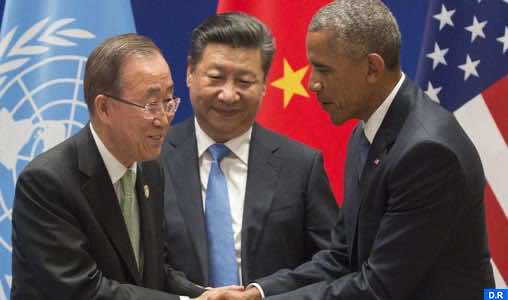 Hangzhou – The United States and China have formally ratified the Paris agreement to curb climate change in a joint announcement Saturday ahead of the G20 summit in Hangzhou.

The joint declaration, made by US President Barack Obama and Chinese President Xi Jinping in what is likely their final meeting before a new president enters the White House early next year, is a major stride toward the global accord being put in force by the end of the year.

“Some day we may see this as the moment that we finally decided to save our planet,” Obama said.

For his part, Xi Jinping called on other countries at the G20 summit to follow China’s lead and ratify the Paris agreement.

“Our response to climate change bears on the future of our people and the wellbeing of mankind,” he said.

The Paris accord, agreed to in December, is the world’s first comprehensive climate agreement which commits countries to cut emissions enough to keep the global average rise in temperatures below 2 degrees Celsius compared with pre-industrial levels.

Though the international climate deal was sealed in Paris last December, it still needs to be signed and delivered by at least 55 countries representing at least 55 percent of global emissions to achieve a legal status called “entry into force.”

Until Saturday, only 23 had done so among the 175 signatories, including France and a number of island states threatened by rising sea levels but only contribute tiny amounts to global carbon emissions.

China and US alone are responsible to almost 40 per cent of total emissions worldwide.