Redouane Dahbi and Ayyub Sadki, both French citizens of Moroccan origin, underwent an interrogation by Moroccan security forces before being extradited to France on August 26.

The investigation revealed their plan to attack crowds in the Republic Square in Metz, France.  The two terrorist suspects were planning to use firearms, vehicles as weapons, and trigger fires in the downtown center of Metz.

Both plans had elements similar to the attacks in Paris in November 2015. Numerous suicide bombers hit the out of the Stade de France in Saint-Denis during a football match, and several mass shooting in restaurant, cafes and at a concert in the Bataclan Theatre.

The used of a truck as a weapon was similar to the more recent attack in Nice, France.  On Bastille Day, July 14th, a terrorist used a massive truck to mow down people watching fireworks.  The French Tunisian driver, Mohamed Lahouaiej-Bouhlel was gunned down but not until the truck killed 86 and injured 303 people.

“The investigations of the Moroccan security services reported that they wanted to hit the Republic Square in the heart of Metz,” said the private Arabic-language Assabah yesterday.

Dahbi was  also found to be planning a terrorist attack on a big nightclub in Metz and a restaurant frequented by homosexuals similar to the attacks which occurred in Orlando Florida in June.

Morocco has not had a large-scale terrorist attack since 2003 when 33 people were killed in Casablanca. Twelve suicide bombers were involved in the attack and came from the poor suburbs of Sidi Moumen.  Another attack in 2011 in Marrakesh in which 17 people were killed.

“On this special occasion, I wish once again ensure Your Majesty of my commitment to further develop the exceptional partnership that characterizes the relationship between our two countries. I also extend to Your Majesty the renewed expression of the true friendship of France for the great Moroccan people”, the French president said in the cable. 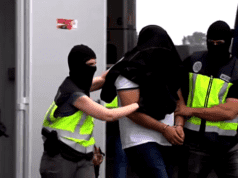