Rabat - Marrakech witnessed an increase in the number of British, Arab and American visitors.

Rabat – Marrakech witnessed an increase in the number of British, Arab and American visitors.

The number British tourists visiting Marrakech has increased 23 percent to reach 501,421.  Visitors from other Arab countries has reached 89,361 representing an increase of 21 percent over last year. The Americans that have visited Marrakesh have increased with a rate of 2 percent compared to last year (55,402 visitors).

On the other hand, the highest decline in the tourist markets is that of Italy at 40 percent drop, followed by Germany at 38 percent, Belgium at 18 percent, then Holland and France down14 percent over last year.

There was a decrease in classified hotel night stays in January, February and June with a rate of one percent, two percent and 20 percent, respectively, according to the Moroccan news source Medias24.

The decline in hotel stays has negatively affected the result of the first half of 2016 which saw a three percent decline; despite the increase of two percent in March.

The average overfill rate in Marrakech hotels has reached 44 percent at an average of 3 nights. The month of April comes first at a rate of 60 percent, followed by May and March at 52 percent and 48 percent respectively. 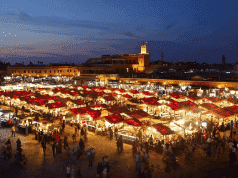