Rabat  - Mosques across Morocco will be fitted with solar energy systems in government scheme to boost clean energy awareness, The Guardian said Monday. 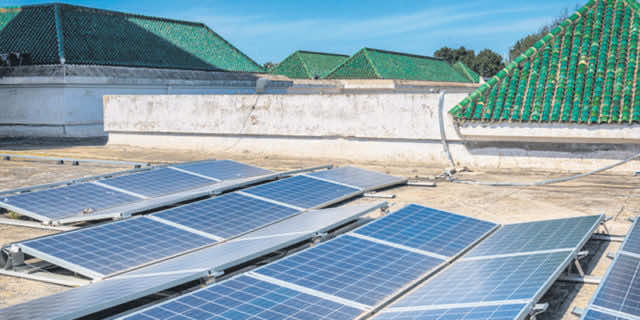 Rabat  – Mosques across Morocco will be fitted with solar energy systems in government scheme to boost clean energy awareness, The Guardian said Monday.

Six hundred “green mosques” are to be created in Morocco by March 2019 in a national consciousness-raising initiative that aims to speed the country’s journey to clean energy, the publication went on.

If all goes to plan, the green revamp will see LED lighting, solar thermal water heaters and photovoltaic systems installed in 100 mosques by the end of this year.

Morocco’s ministry of Islamic affairs is underwriting the innovative scheme, paying up to 70% of the initial investment costs in a partnership with the German government, the source added.

Jan-Christophe Kuntze, the project’s chief, said: “We want to raise awareness and mosques are important centers of social life in Morocco. They are a place where people exchange views about all kinds of issues including, hopefully, why renewables and energy efficiency might be a good idea.”

Morocco has established itself as a regional climate leader with high-profile projects, ranging from the largest windfarm in Africa to an enormous solar power plant in the Sahara desert, which opened earlier this year.

In November, Marrakech will host the COP22 climate summit to discuss preparations for implementing the Paris climate agreement.

The country’s environment minister, Hakima el-Haité, told the Guardian that religion could make a powerful contribution to the clean energy debate, shortly before an Islamic declaration on climate change last year.

“It is very important for Muslim countries to come back to their traditions and remind people that we are miniscule as humans before the importance of the earth,” she said. “We need to protect it, and to save humankind in the process.”

The new green mosques project plans to do this with established technologies that can be adapted to public buildings and residential homes. By training electricians, technicians and auditors, it hopes to direct Morocco’s clean energy along the path followed by German’s Energiewende, (energy transition). But Kuntze stressed that Germany was offering technological support, rather than financial opportunities for its own industries.

“We are not representing any German business interests at all,” he said. “The good thing about this project is that the Moroccan government came up with the idea themselves. It is something new and really innovative and it has not been tried anywhere else before, to my knowledge.”

The initiative has broken new ground for gender equality in Morocco too. Many mourchidates (female clerics) have been involved in the project, as well as imams, and about a quarter of the participants in recent seminars have been women, Kuntze said.

Under the project’s energy service contract model, contractors will eventually be paid by the energy savings generated from the clean power systems they install. As the renovations should cut the mosques’ electricity usage by 40%, these should be substantial, the publication underlined.

The first 100 mosques to get a green makeover are mostly based in big population centers – such as Rabat, Fez, Marrakech and Casablanca – but the project will quickly move on to smaller villages and towns. With 15,000 mosques dotted around the north African country, the idea’s growth potential is clear.

The objective was to kickstart a renovations industry for sustainable companies that could employ many Moroccans in the clean energy sector, Kuntze said.