Rabat - A video shows an imam caught by the residents of a neighborhood in Fez, in the act of sexual intercourse. 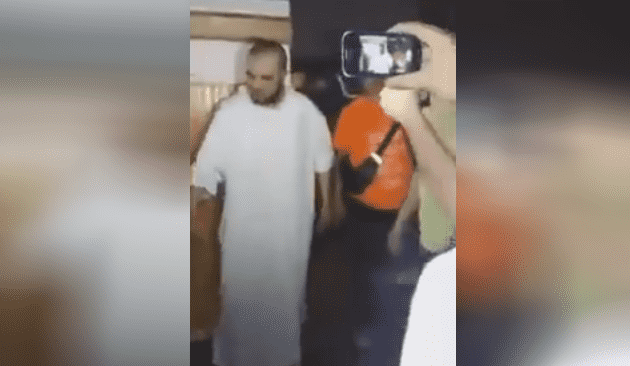 Rabat – A video shows an imam caught by the residents of a neighborhood in Fez, in the act of sexual intercourse.

The video, which was published on YouTube on September 4, has gone viral on social media. The tape shows the inhabitants of the Imam neighborhood where the mosque is located, with his fully covered mistress inside of the mosque.

The Imam who was allegedly caught profaning the sanctity of a mosque appears in the video arguing with the residents, seemingly trying to defend himself. This did not stop the angry crowd from bitterly denouncing his misdeed and cursing him and his partner for desecrating the holiness of their place of worship.

One of angry people around the Imam says in the video, “he was exposed by God.”

The video ends with the police dragging the Imam and his partner from inside of the mosque, while the offended people surrounding him continue to curse and spit on him.

According to the French news website, Lesiteinfo, an employee in the mosque surprised the Imam and his mistress as they were in the act of sexual intercourse. The inhabitants of the neighborhood quickly gathered around them while the offenders were still in the mosque.

The news website adds that the Imam and his mistress were taken to the police station where the police conducted a rigorous investigation.

A similar incident took place in a small village near Kenitra, north of Rabat, where an Imam was allegedly caught engaged in sexual intercourse with a mother of two children, in the absence of her husband.