Vientiane (Laos) - Myanmar's Deputy Minister of Foreign Affairs Kyaw Tin said, Tuesday in Vientiane (Laos), that his country does not recognize the so-called "SADR" contrary to the claims of the Polisrio. 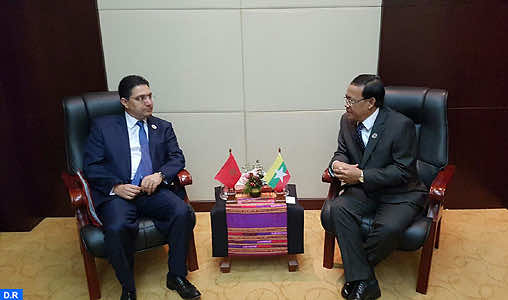 Vientiane (Laos) – Myanmar’s Deputy Minister of Foreign Affairs Kyaw Tin said, Tuesday in Vientiane (Laos), that his country does not recognize the so-called “SADR” contrary to the claims of the Polisrio.

“Myanmar supports Morocco’s efforts to settle the conflict and understand the kingdom’s position,” Kyaw Tin said during a meeting with Minister Delegate to the Minister of Foreign Affairs and Cooperation, Nasser Bourita, on the sidelines of the 28th and 29th ASEAN Summits of Heads of State of the Association of South-East Asian Nations (ASEAN), held in Vientiane, Laos (Sept 6-8).

The Myanmar’s Minister, who expressed his satisfaction with Morocco’s signing of instruments of accession to the Treaty of Amity and Cooperation of ASEAN, said that this partnership opens the way for further cooperation between Morocco and Myanmar, as part of the Treaty of ASEAN which advocates the peaceful settlement of disputes, non-interference in the internal affairs of member countries and respect for independence and regional security in these countries.

He also expressed his country’s wish to promote Morocco-Myanmar relations to include all aspects of political, economic and cultural cooperation, adding that Myanmar will benefit from Morocco’s experience in various fields.

Morocco on Tuesday signed the instruments its accession to the Treaty of Amity and Cooperation (TAC) of the Association of Southeast Asian Nations (ASEAN), which is a regional bloc of ten countries, namely Indonesia, Malaysia, Philippines, Singapore, Thailand, Vietnam, Brunei, Cambodia, Burma and Laos.