Seoul - North Korea is believed to have conducted a fifth nuclear test, its most powerful to date, South Korea's military said Friday. 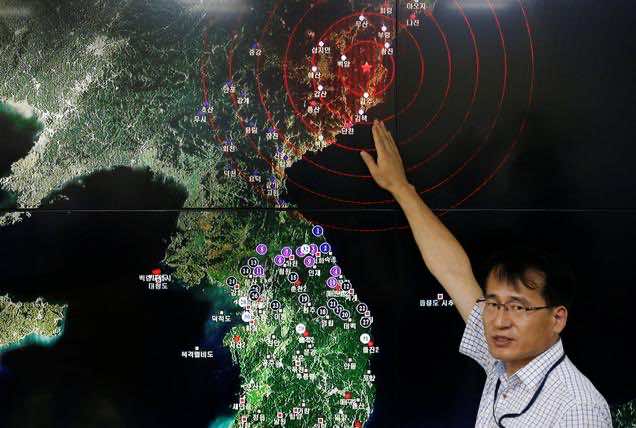 Seoul – North Korea is believed to have conducted a fifth nuclear test, its most powerful to date, South Korea’s military said Friday.

A 5.3-magnitude “artificial earthquake” was detected near North Korea’s Punggye-ri nuclear test site as the country celebrates Foundation Day, which marks the anniversary of the founding of the nation in 1948.

“We believe that it was a nuclear test. We are trying to figure out whether it was successful. The blast measured about 10 kilotons,” a defence ministry spokesman told reporters.

The North’s third nuclear test, staged in February 2013, was previously considered the most powerful to date, with a yield of six to nine kilotons.

Japan’s public broadcaster NHK reported the country’s defence ministry was preparing to dispatch aircraft to analyse air samples to see if any radiation could be detected.

“If North Korea conducted a nuclear test, that can never be tolerated. We must lodge a strong protest,” said Japanese Prime Minister Shinzo Abe.

The US National Security Council said it was aware of seismic activity in the region of the test site and was “monitoring and continuing to assess the situation in close coordination with our regional partners.”

Pyongyang test-fired three missiles Monday as world powers gathered for a G20 meeting in China, with leader Kim Jong-Un hailing the tests as “perfect”, and US President Barack Obama warning it would only up the pressure.