Skhirat - The priority of the Moroccan Presidency of COP22 is to increase the proportion of financial flows to address climate change adaptation, Special Envoy for Mobilization of COP22 and Morocco's High-Level Champion of the United Nations Framework Convention on Climate, Hakima El Haite, said Friday in Skhirat (Rabat suburbs). 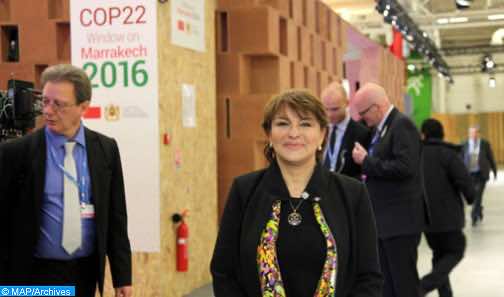 Skhirat – The priority of the Moroccan Presidency of COP22 is to increase the proportion of financial flows to address climate change adaptation, Special Envoy for Mobilization of COP22 and Morocco’s High-Level Champion of the United Nations Framework Convention on Climate, Hakima El Haite, said Friday in Skhirat (Rabat suburbs).

“Today, this proportion is between 16 and 18% of global climate financial flows, and we hope it will be increased to 30% and that this decision will be taken during COP22”, El Haite told the press on the occasion of the closing ceremony of the informal consultations held in preparation for the 22nd session of the Conference of the Parties (COP22) of the United Nations Framework Convention on Climate Change (UNFCCC).

El Haite said “a consensus has been reached on the pre-2020 agenda which is crucial for the most vulnerable countries, particularly Africa”, noting that this agenda “should be achieved in the form of a decree implementing the Paris Agreement in November in Marrakech”.

The consultations brought together between 140 delegates and climate negotiators from over 50 countries in preparation for the 22nd session of the Conference of the Parties (COP22).

The goal of these closed-door consultations was for delegates to advance on discussions around key issues such as expected outcomes for the COP22 conference in Marrakech, the Pre-2020 Agenda including developing a $100 billion per year climate finance roadmap and the status of ratifications and possible early entry into force of the Paris Agreement.