Casablanca - The Prime Minister of Turkey, Binali Yildrim, participated in Eid prayer in the Faculty of Theologies’ mosque at Uskudar Marmara University. 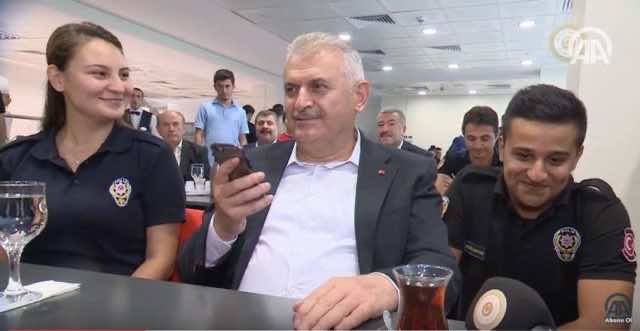 Casablanca – The Prime Minister of Turkey, Binali Yildrim, participated in Eid prayer in the Faculty of Theologies’ mosque at Uskudar Marmara University.

After the prayer, the Prime Minister attended a breakfast with Istanbul police officers in the cafeteria.

During this breakfast where Yildrim chatted with officers about different issues, a young police officer asked the Prime Minister to call his fiancé’s family and persuade them to let them marry their daughter this year rather than next year.

Around the breakfast table, another police officer asked Yildrim to call the parents of a girl he wanted to marry, but whom had refused his marriage request. Again the Prime Minister took the phone and called the girl and her family.

A videotape posted on the Turkish news website, Hurriyet, shows the entire discussion that was filled with outbursts of laughter from the officers witnessing the event.

The Prime Minister called the girl first, then her mother, and finally received a marriage approval from the father. After, the Prime Minister asked to call the officer’s mother and herald the news of the approval of the girl’s family, which the mother received with joy.

After breakfast, Yildrim moved from one table to the another and shook hands with officers one by one before leaving the headquarters.

Eid Congregational Prayer: An Experience of Divinity and Spirituality