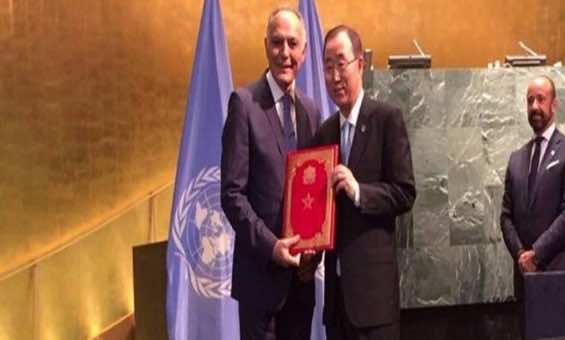 By depositing the instruments of ratification of the Paris Agreement on Climate, Morocco confirms its commitment taken at the highest level of the State, said, on Wednesday in New York, foreign minister Salaheddine Mezouar.

“HM King Mohammed VI entrusted me with the mission to deposit the instruments of ratification of the Paris Agreement. Morocco confirms by this initiative its commitment and determination to make the COP22 a turning point leading to the ratification of the agreement,” Mezouar told the press.

The minister made this statement after the ceremony of deposit of agreement ratification instruments, chaired by UNSG Ban Ki-moon, on the sidelines of the 71st UNGA.

For Mezouar, who is also the COP22 president, this is a historic moment and a confirmation of Morocco’s strong commitment within the framework of agreements adopted in Paris during the COP21.

The minister said that Morocco, along with France, committed itself throughout this year to a campaign of awareness-raising and mobilization of states ahead of the COP22 slated on Nov. 7-18 in Marrakech.

He noted that, considering the announced ratifications, they are already 60 states representing 47.5% of greenhouse gas emissions, adding that we are nearing the goal of 55%.