Tangiers - King Mohammed VI, Commander of the Faithful, kicked off, after the Friday prayer at the "Al Imam Al Boukhari" mosque, in Beni Makada neighborhood in Tangiers, the National Anti-Illiteracy Program in Mosques for the year 2016-2017. 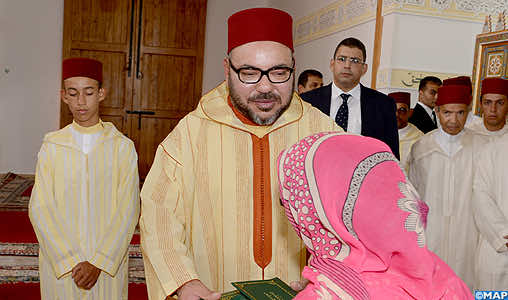 Tangiers – King Mohammed VI, Commander of the Faithful, kicked off, after the Friday prayer at the “Al Imam Al Boukhari” mosque, in Beni Makada neighborhood in Tangiers, the National Anti-Illiteracy Program in Mosques for the year 2016-2017.

Afterwards, the King visited two areas, one for men and one for women, meant for the Anti-Illiteracy Program in Mosques.

The said program was launched pursuant to the royal instructions laid down in the speech delivered on the 47th anniversary of the Revolution of the King and the People (Aug. 20, 2000), in which the monarch ordered that “mosques remain open to offer literacy courses as well as religious, civic and health education, according to a sound program.”

This program also enables mosques to recover their leading role in terms of spiritual guidance and literacy, in addition to building a democratic society that is modern, open, and based on the rejection of exclusion, marginalization and ignorance, and the fight against poverty.

This program, whose implementation was entrusted to the ministry of endowments and Islamic affairs, achieved very satisfactory results that went beyond the initially set goals thanks, mainly, to the increase of the number of mosques taking part in it, and the rise of the number of supervisors, coordinators and pedagogical advisors.

The ministry of endowments and Islamic affairs mobilized, during the same period, over 6,500 mosques (52% in the rural zone), and tasked 6,182 supervisors, 143 coordinators, 729 advisors and 370 pedagogical trainers to ensure the implementation of the said program.

The ministry is also carrying out the TV and Internet Anti-Illiteracy Program, which benefited over 288,600 people in the year 2015-2016.