Rabat - A new video shows Moroccan Jews at dancing and singing at a party while carrying a photo of King Mohammed VI. 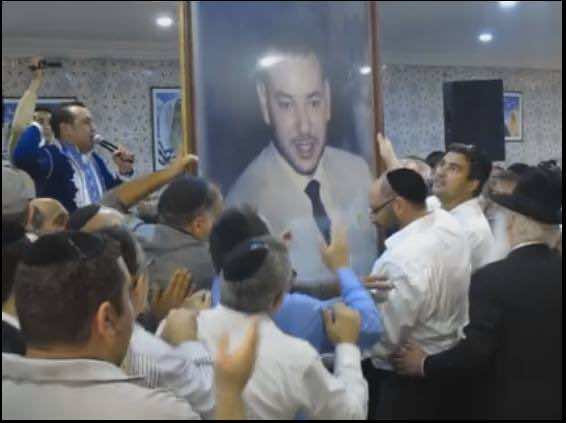 Rabat – A new video shows Moroccan Jews at dancing and singing at a party while carrying a photo of King Mohammed VI.

The video was published by the Facebook fan group of the news website Essaouira Alan, and has attracted over 450,000 views in one day. It shows members of the Jewish community dancing in a circle while carrying a huge photo of Mohamed VI, monarch of Morocco.

The video also shows the presence of Muslims in the crowd and government officials, clapping while the Moroccan Jews gather in the center around the photo of the king dancing and hopping.

The song they danced to, ‘Sawt Al Hassan’ (which means “The Call of Hassan” in English), is a particularly important song for Moroccans. It records the memorable historical moment of the ‘Green March’ when King Hassan II inspired Moroccans march to the Moroccan Sahara to free it from the Spanish colonizer. Other songs praising the king were sung as Moroccans Jews wearing the Kappa continued dancing.