Cartagena  - Colombia and the Revolutionary Armed Forces of Colombia, known as FARC, signed on Monday a peace deal aimed at ending more than 50 years of conflict in the South American country. 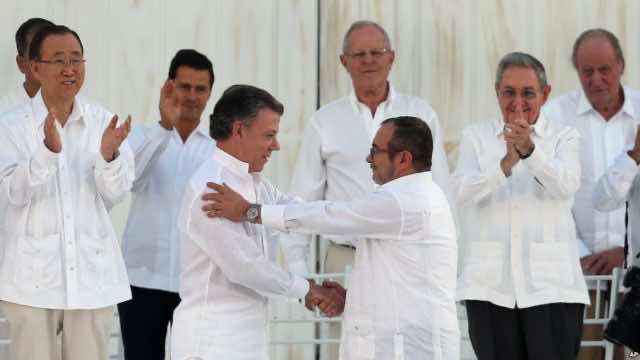 Cartagena  – Colombia and the Revolutionary Armed Forces of Colombia, known as FARC, signed on Monday a peace deal aimed at ending more than 50 years of conflict in the South American country.

Timochenko apologised to “all the victims of the conflict” and was greeted by cheers and applause.

He said: “I would like to ask for forgiveness for all the pain that we have caused during this war.”

Guests dressed in white at the ceremony in Cartagena, to symbolise peace.

The peace deal between FARC and the government took four years to negotiate. The sides agreed to the deal in June. The negotiations mainly took place in Havana, Cuba after starting in Oslo, Norway in 2012.

The agreement must be approved in a referendum to be held on October 2.