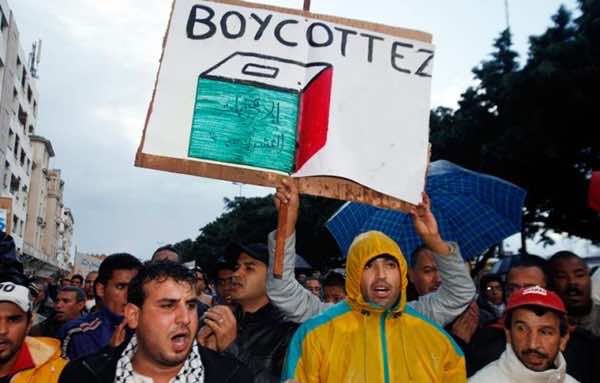 Ouarzatae –  Just like many other countries, in 2011, Morocco was on the verge of being plagued with the so-called “Arab Spring;” through which impoverished and oppressed citizens tried to rebel against their rulers, whom they considered to be dictators. Morocco couldn’t escape from the heavy stream of furious youths who sought emancipation through local strikes; however, unlike other countries, such as Tunisia and Syria, Moroccan authorities could stem the tide of any uprising attempt. They hurriedly made amendments in the constitution, with promises of better living conditions.

It’s been five years, and as far as I’m concerned, nothing special has taken place so far. As elections near, most if not all Moroccans lack the zest for voting, others have already decided to abstain per usual. I believe that most Moroccans will boycott the elections as long as sectors such as health care, education and others lay stagnant in the abyss.

I always feel a deep sadness when writing or even thinking about healthcare in Morocco. To unveil the situation of this sector, suffice it to say that the total expenditure on health in Morocco is 5.9% of GDP (Gross Domestic Product) in 2014. For comparison, total expenditure on health is 8.8 % in South Africa, and 7.0% in Tunisia, based on the data available at Global Health Observatory.

The budget remains unsatisfactory for a country of 40 million inhabitants. There is also a scarcity of hospitals, and if they do exist, they are not well equipped. In terms of where I live, let’s take Ouarzazate hospital for example. Patients in a critical condition are often sent off to Marrakech to be treated due to the lack of equipment in the local hospital. Unfortunately, many die en route in ambulances. Today, it’s conceivable that those serious injuries entail death. People even make a set of jokes on this respect.

So if local authorities are unable to equip hospitals, or at least enhance the services, why should we vote? According to a report presented by Hussain Elwardi, the Minister of Healthcare, at Parliament in 2012, only one doctor is assigned to every 1,630 Moroccan citizens.  Adding to the rarity of doctors, you sometimes need an intermediary just to meet and consult the doctor. If there is no doctor available, then some resort to bribery to finally meet with a doctor. To be fair, however, there are doctors who stick to their principles at work.

Today, people prefer clinics, despite the price of clinics being beyond their means. As the saying goes, “health is better than wealth.” In Morocco, however, the healthcare system has shown that the wealth of rich people is better than health of citizens.

With regard to education, there is no doubt that this sector suffers a great deal in Morocco as well.  First of all, schools in remote areas are completely marginalized, and their roofs are about to collapse due to the age of the buildings. Not to mention, the totally impassable roads to such schools, especially during annual rainfalls and snowfalls. Unfortunately, some students quit early while some teachers prefer joblessness to uncongenial working environment.

Although schools in remote areas are inadequate, that doesn’t mean that schools in the city are much better. I work as a teacher in the city, and I’ll portray the situation in my own words: overcrowded classrooms, lack of materials, lack of facilities for teachers, scarcity of teachers, and worst of all, lack of any plan for the future.  How can we vote while our schools are unsuitable?

The school curriculum has been a subject to criticism for years; most of them are void of any purposeful or constructive content. Lately, students graduate lacking knowledge in domains that they studied for years. I always wonder; why are most of Moroccan students unable to speak French? Don’t they study the French subject since primary school? Is it the curriculum, the teacher or the student? We must have heard of “Education Emergency Program 2009-2012.” A huge fund was allotted for the program in order to reform the educational sector, but to no avail. After the failure of this program, a new one was designed to seek further reformation. I strongly believe that there is no political ambition or strong desire to improve this sacred sector. Authorities should bear in mind that the country will remain underdeveloped unless education is prioritized.

Many people may oppose my stance, claiming that Morocco is gradually developing, and we have to vote to contribute in such progress. I partially agree; yes, Morocco is developing, but only for the elite. Today the poor are growing poorer, and the rich have turned wealthier. There are TGV and highways, but the country lies in the labyrinth of ignorance and abject misery.

People are oppressed whenever they ask for their rights. Let’s take, for instance, the trainee teachers and the would-be doctors who led white marches for months. The authorities, as usual, failed to solve the crisis, and used their force as a shortcut.

Furthermore, corruption, nepotism and embezzlement have become deeply rooted in our society. There is an absence of accountability for most of these cases. Not to mention prisoners of conscious and oppressed journalists. How can we vote in elections while basic food is beyond the means of most Moroccans, bearing in mind that Morocco ranks the top in agriculture and is considered the largest fish market in Africa? How about joblessness, child abuse, poverty, illiteracy, violation of human rights?

I am sure that those who say that Morocco is in progress live in the lap of luxury. If they had gone to remote areas, they would realize that Morocco is not  heaven on earth. Others who oppose my stand may have fallen prey to the fake and unbiased local media. Unfortunately, “media makes the guilty innocent, and the innocent guilty,” as Malcom X once said. I believe that if we vote, no progress will come, and our votes will go with the wind.

Finally, I have to say that I always take a sanguine view of problems involved. My words come out of a genuine love for my country. Moroccan citizens must have endured the unbearable. Corruption is a seemingly insurmountable barrier toward change. Unfortunately, these problems may take decades to be wiped out.

As we know, electioneering will soon start. Almost the same faces in past elections will lead their parties to gain voters. I believe that they will have to find new tricks to deceive citizens. I hope candidates will understand how heavy the burden of being an elected leader is. Only then will they realize that serving one’s own country remains above all, and only then will they quit embezzling funds for their benefits. This seems to be a pipe dream, because a leopard cannot change its spots. Above all, until voting becomes beneficial for Moroccan citizens, most will withhold their vote.