Tangiers – The Setting up of a Boeing ecosystem, a new sign of confidence for Morocco at the international level. 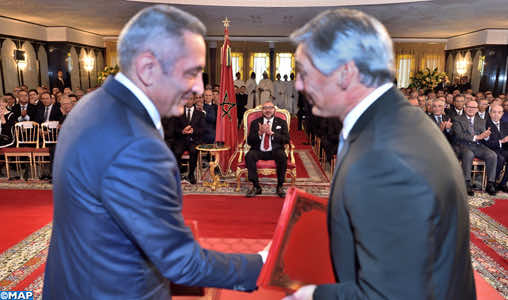 Tangiers – The Setting up of a Boeing ecosystem, a new sign of confidence for Morocco at the international level.

King Mohammed VI, chaired, on Tuesday at the Royal Palace in Tangiers, the signing ceremony of a draft agreement for the establishment of a Boeing industrial ecosystem in Morocco, a structuring project that will allow the Moroccan aviation industry to improve its position significantly at the international level.

This major project, which is a partnership between Morocco and Boeing, the world leader in aerospace technology, will give structure to an ecosystem composed of suppliers and organize a sourcing platform based in Morocco.

This ecosystem will generate an additional annual turnover from exports of one billion dollars, allow the setting up of 120 Boeing suppliers and create 8,700 new specialized jobs. To cover the training needs of its ecosystem, dedicated training programs specially designed by Boeing will be implemented.

At the beginning of the ceremony, a documentary movie was screened highlighting development witnessed by the aviation sector, one of Morocco’s global businesses, in recent years, as part of the Industrial Acceleration Plan, launched on April 2, 2014.

On this occasion, minister of Industry, Trade, Investment and Digital Economy, Moulay Hafid Elalamy, gave a speech before the Sovereign, in which he presented the main outlines of this project, which is a strong signal to the industrial world, confirming to operators the real capabilities of Morocco, especially in the most complex and high value-added sectors.

“The Moroccan aviation industry has witnessed, under Your enlightened vision, significant growth in recent years. The sector was multiplied by 6 in 10 years and has now 121 actors,” said Elalamy, noting that the Kingdom, which is ranked 15th in terms of investments in the aviation sector, was able to be among the few countries operating in this area.

Recalling the fact that a “locomotive” ecosystem reinforces the efficiency and attractiveness of the sector, while creating a virtuous circle of prosperity within the national economy, Elalamy said that Boeing industrial ecosystem will be a “real boost” to the aviation sector, like Renault and PSA ecosystems to the automotive industry.

President of Boeing “Commercial Airplanes” has, for his part, lauded the strategic vision of HM the King which enabled Morocco to invest in the high-tech aerospace industry. “Boeing is proud of the trusting relationship we had with Morocco and its aviation industry for nearly 50 years”, he said, adding that the “Kingdom offers unique opportunities that will benefit Boeing and our extended supply chain.”

“We are signing a significant agreement to enable more foreign investment and development of the aerospace industry here,” he noted, underlining that “we have collaborated with the government to develop an integrated industrial program of incentives to bring more Boeing suppliers to Morocco.

Boeing will also be an advisor to the government’s plan for a new vocational and educational training institute. This will provide a pipeline of skilled workers for the aerospace jobs of tomorrow, he affirmed.

Afterwards, the King chaired the signing ceremony of a draft agreement between the State of Morocco and aircraft manufacturer “Boeing” concerning the setting up of an ecosystem for aircraft parts manufacturing. The draft agreement was inked by Moulay Hafid Elalamy and Raymond L. Conner.

The King, then, decorated Raymond L. Conner. with the Alawite Wissam of Exceptional Rank (Grand Sash).