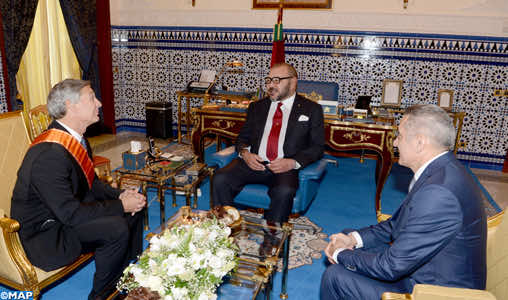 “We have signed an agreement for the setting up of a Boeing industrial ecosystem in Morocco that will allow us to develop an incentive program to bring new Boeing suppliers to settle in the country,” said Conner in a statement to the press after the audience granted to him by HM King Mohammed VI at the Royal Palace in Tangiers.

“We will work closely with the government, notably the ministry of Industry to encourage our suppliers to settle in Morocco and develop their aerospace industry, already present in the kingdom, and to benefit from the incentive program introduced by Morocco,” he added.

This ecosystem will generate an additional annual turnover from export of one billion dollars and create 8,700 specialized jobs, said the president of Boeing “Commercial Airplanes”.

The audience was attended by minister of Industry, Trade, Investment and Digital Economy, Moulay Hafid Elalamy.

HM the King had earlier chaired the signing ceremony of a draft agreement for the establishment of a Boeing industrial ecosystem in Morocco.