Rabat - Mark Ross got the call we never want to get. His 15-year-old sister was killed in a car accident. It was 3 A.M.

Rabat – Mark Ross got the call we never want to get. His 15-year-old sister was killed in a car accident. It was 3 A.M.

He needed to travel from Indiana to Detroit to be with his family but had no car. So he convinced a friend with a suspended license to drive and sure enough, they were pulled over by Ohio State Highway Patrol for speeding.

The situation could have easily turned deadly, both the driver and Ross are African-American. There have been so many reported cases of police shooting black men in the U. S. The most recent in Charlotte, North Carolina caused three days of fierce rioting.

But Ross told the officers the reason he needed to get to Detroit.

“I explained to the officer that my sister had died and that I needed to get to my mother ASAP” Ross said. “I broke down crying and he saw the sincerity in my cry.”

Ross had a misdemeanor warrant which made the situation worse. The police had to follow procedure. They summoned both Ross and the driver and towed away their car. But the warrant-issuing state refused to pick up Ross.

“He offered to bring me 100 miles [160km] further to Detroit because they towed the vehicle,” Ross said.

After the long trip to Detroit, the police Sergeant said a prayer with Ross and gave him comfort. A far cry from the perceived notion of American police officers as racist and ready to kill without cause.

“Everybody knows how much I dislike cops but I am truly grateful for this guy,” said Ross. “He gave me hope.” 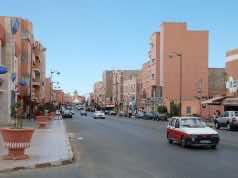 Suspected Drug Traffickers Face Off With Moroccan Police in Laayoune