Morocco World News
Home News Morocco Missing Infant Is Returned to Her Parents, King to Pay for Her...

Rabat - The missing toddler whose story mobilized Moroccan social media users was returned to her parents, and King Mohammed VI has offered to pay for her medication. 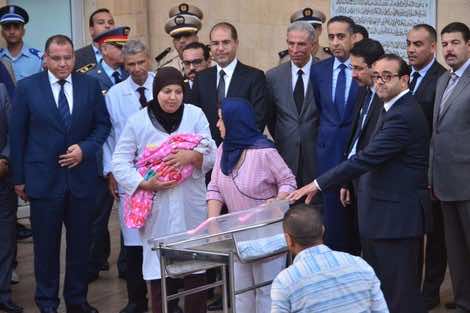 Rabat – The missing toddler whose story mobilized Moroccan social media users was returned to her parents, and King Mohammed VI has offered to pay for her medication.

The news of an infant abducted from Abderrahim Harouchi Hospital in Casablanca broke last week and mobilized the masses on social media. The video of her father was posted the same day of the incident, and was widely shared. Shortly after, the authorities published a rough sketch of the suspect, which also went viral.

To her parents’ surprise, the toddler was found today in the streets of Casablanca. Janat Zoufir was delivered to her mother in the presence of the governor of Casablanca, Settat Khalid Safir, and Abdellatif Hamouchi, Director General of National Security.

The Arabic-speaking news website Hespress reports that the mother was euphoric when she saw her child again, after the long search throughout the entire city of Casablanca.

As soon as he heard that the toddler was found, King Mohammed VI gave orders to the medical crew to treat the toddler and provide the psychological support to the parents on his personal expense.

A source told Hespress that the services of the Directorate General for National Security had opened a thorough investigation soon after the abduction, which led to the discovery of the toddler today.

The same source continued that DNA profiling confirmed that the infant found in the street is the same one that went missing last week.