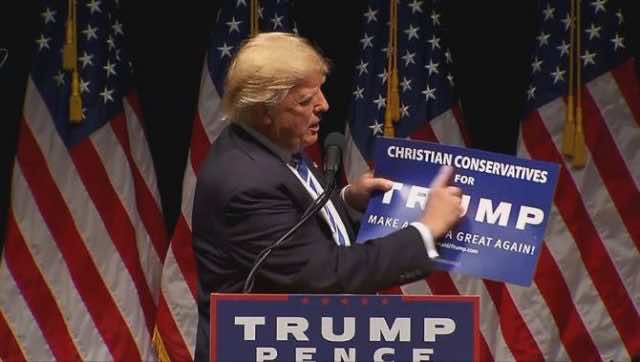 London – Donald Trump have asked non-conservative Christians at his rally to raise their hands, adding ‘should we keep them?’

At his rally in Iowa on Wednesday, the ever-controversial Republican candidate, Donald Trump, jokingly asked supporters whether or not to kick out non-Christians at the rally.

The Presidential candidate has previously spoken of his desire to kick out Muslims from the country and prevent Muslims from further entering the US.

His comments at Wednesday’s rally have caused worry amongst religious groups in the country.

Trump asked conservative Christians to raise their hands, after he boasted of their backing an support, he further went on to ask audience members who were not Christian to identify themselves.

Whilst his comments may have been in jest, his joke stirred up much debate on social media. @HeerJeet tweeted “A bit worrying if you are agnostic, atheist, Muslim, Hindu, Jew, Buddhist, Sikh, or even, God forbid, a liberal Christian.”

@edjames01 pointed that “Trump isn’t even a Christian conservative’

Ibrahim Hooper, the national communications director of the Council on American-Islamic Relations, felt Trump’s comments to be alarming. “Given Mr. Trump’s history of targeting religious and ethnic minorities, it is disturbing that he would single out non-Christians during his rally in Iowa,” Hooper said. “It is clear that his vision of America is one of division and exclusion, not unity and acceptance,” Mr Hooper said.

This Presidential race has not been without controversy, with the Republican candidate, Trump and Democrat candidate, Hilary Clinton, taking centre stage. This incident comes after a string of various controversial discourses surrounding the election race.

The vote is set for Tuesday, November 8th, whereby Americans will take to the polls, to not only decide the fate of their country, but also to play a hand in the fabric of the international political scene.