Rabat - Party leaders cast their votes today for the legislative elections to elect a second government after the 2011 constitutional reform. 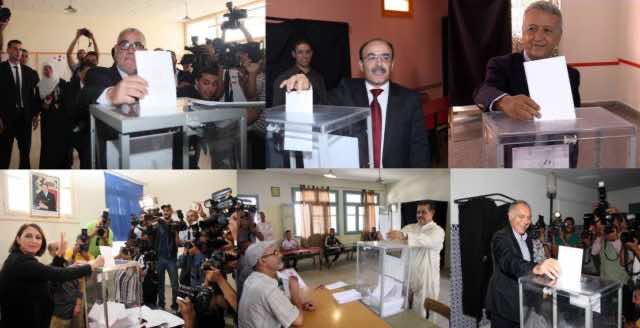 Rabat – Party leaders cast their votes today for the legislative elections to elect a second government after the 2011 constitutional reform.

Leaders were seen at election polls through viral photos posted on social media, presenting them as Moroccan citizens fulfilling their duty.

According to the Interior Ministry, polling stations opened their doors in normal conditions at 8 a.m. across Morocco. Approximately 15.7 million Moroccans are expected to elect a new government.

Abdelilah Benkirane, ongoing head of government and Secretary General of Justice and Development Party (PJD) went to Mouad Ben Jabal Elementary High School in Rabat to cast his vote. Benkirane said that he “will retire from politics if the PJD does not win the elections.”

Fierce rival of Benkirane, Ilyas El Omari, Secretary General of the Party of Authenticity and Modernity (PAM) went to Jebran Khalil Jebran Elementary School with his wife to cast his vote in the limelight of mass media.

Head of National Rally of Independents and Outgoing Minister of Foreign Affairs, Salaheddine Mezouar also went to fulfill his civic duty in the Anfra District in Casablanca.

Mohamed Nabil Benabdellah, General Secretary of the Party of Progress and Socialism (PPS) casted his vote at 11 a.m in Oum Banin Elementary High School in Rabat.  Benabdellah protested while voting after witnessing PAM’s banners in front of the school that was publicizing his campaign.

Nabila Mounib, Secretary-General of the United Socialist Party (PSU) went to Al Wafae Elementary in Casablanca to cast her vote.

Driss Lachgar, the First Secretary of the Socialist Union of Popular Forces (USFP)  voted in Al Hassaniya High School in Rabat. Last month, Lachgar stated that his party would win the election.

Mohammed Sajid, Secretary General of the Constitutional Union Party casted his vote this morning in the California neighborhood in Casablanca. Sajid said, “the elections are well underway.”