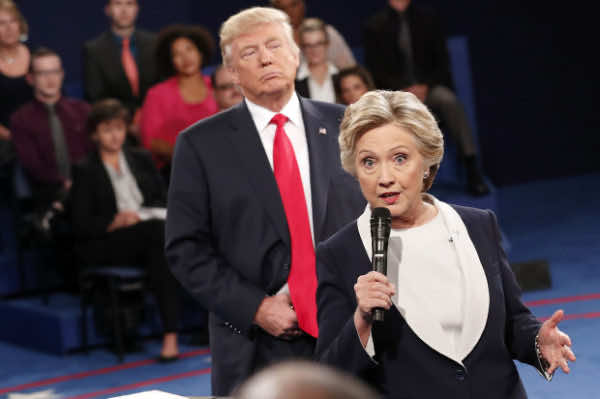 Rabat – When presidential nominees Hillary Clinton and Donald Trump took to the stage in St Louis for the second presidential debate on Oct. 9, they didn’t shake hands, signaling the bitterness that was to come for the remainder of the evening.

While the debate mostly focused on the onslaught of negative press following revelations about Trump’s tax returns and a decade-old video portraying his sexually aggressive comments about women, his comments about Muslims also drew sharp criticism.

The candidates were asked to address Islamophobia by Muslim woman who inquired, “How will you help people like me deal with the consequences of being labeled as a threat to the country after the election is over?”

Trump responded by advocating for watchdog tactics within Muslim communities.

“We have to be sure that Muslims come in and report when they see something going on. When they see hatred going on, they have to report it,” Trump suggested.

He called on the 3.3 million Muslims in America to do more to stop attacks.

“As an example, in San Bernardino many people saw the bombs all over the apartment of the two people that killed fourteen and wounded many many people,” he said.

That answer, coupled with Trump’s choice to position himself behind Clinton as she responded to some questions, led to a viral tweet by New York professor Moustafa Bayoumi: “I’m a Muslim, and I would like to report a crazy man threatening a woman on a stage in Missouri.” The hashtag “#MuslimsReportStuff” soon took off.

Clinton’s staff immediately pointed out Trump’s hypocrisy by tweeting: “‘You are right about Islamophobia, and it’s a shame.’ —Donald Trump, who proposed a ban on Muslims entering the U.S.” During the debate, the Democratic nominee didn’t have any kind words for Trump’s proposed Muslim ban.

“We are a country founded on religious freedom and liberty. How do we do what [Trump] has advocated without causing great distress within our country?” she said. “Are we going to have religious tests when people fly into our country?”

When asked about his call to ban foreign Muslims from entering the United States, Trump said his plan “has morphed into an extreme vetting,” but failed to give details about what it had morphed into when pressed by moderator Martha Raddatz. Trump also claimed that Clinton cannot fight terrorism because she cannot say “the name radical Islamic terror”.

Clinton fired back at Trump, calling his rhetoric “a gift to ISIS and the terrorists”.

“It’s very short-sighted and even dangerous to be engaging in the kind of demagogic rhetoric that Donald has about Muslims. I’ve met with a lot of [different Muslim groups around America], and I’ve heard how important it is for them to feel that they are wanted and included and part of our country, part of our homeland security, and that’s what I want to see,” Clinton responded.

“It’s also important I intend to defeat ISIS, to do so in a coalition with majority Muslim nations. We are not at war with Islam. And it is a mistake and it plays into the hands of the terrorists to act as though we are,” she said.

The third and final presidential debate will take place on Wednesday, Oct. 19.