Chicago - "One of the reasons people hate politics is that truth is rarely a politician's objective." Are these word of Cal Thomas too judgmental to leave everything in politics behind us? I guess no! 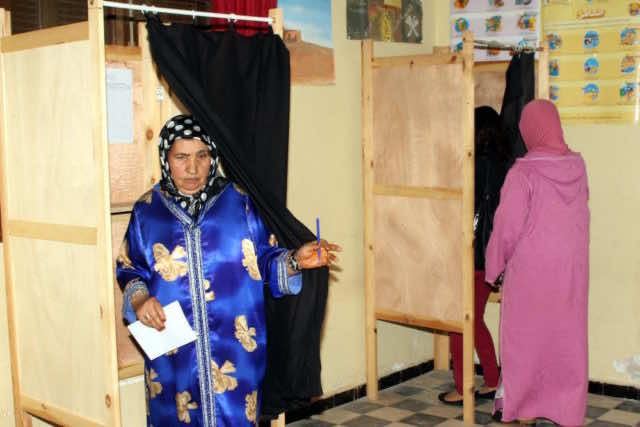 Chicago – “One of the reasons people hate politics is that truth is rarely a politician’s objective.” Are these word of Cal Thomas too judgmental to leave everything in politics behind us? I guess no!

Let us not fall prey to this mode of passivity and seek instead to accept our responsibility in fixing the blames.  Of course, people have heard of all the ugly things about politics including elections in non-democratic societies. Yet, we cannot hold to the stupid idea that we keep silent and let things go in their way. This is a bitter pill to swallow and ultimately serves no benefit to the welfare of people. What matters most amid this a bit-of-dilemma is to voice anger, wrath and despair. That is to bring forth to new solid and true alternatives, even at at the theoretical level. That is partially to say: Enough of hollow oratories…

It is true that the outcomes of Friday’s legislative elections should define, in one way or another, the political map for Morocco though not persuasively enough to raise high expectations, to add something serious to the political scene, to have a practical value or impressive influence on democracy.  We desperately wish if it could.  Moroccan democracy is still immature to be appealing to voters. Otherwise, the turnouts from Friday’s polls should have been much bigger. No doubt, that the election boycott is still Moroccans’ first pick.

The adoption of new constitutional reforms following a national referendum in 2011 marked a turning point in modern Morocco’s politics. The changes made to the constitution amid huge protests stripped the king of some of his political powers and strengthened the authority of the country’s prime minister, including the right to appoint government officials previously held by the king.

The fact is nothing seriously has changed on the ground and people know this very well. On September 30th, Mrs. Nabila Mounib, the Secretary General of the United Socialist Party and one of the new impressive faces in Moroccan political arena, told CNN: “the constitution of 2011 didn’t go far enough to enshrine democratic values in Morocco. It did not outline a clear separation of powers, it did not truly stipulate the characteristics of the parliamentary monarchy, and it did not link responsibility to accountability.”

The 7 million Moroccans who voted on Friday to elect the 395-member Chamber of Representatives in 95 electoral districts realize well that their choice to cast a vote was not driven by hope in a better future rather mostly a responsive act of support to their favorite parties. The elections were more of an immature ideological act igniting the burning fire of partisan demagogy. Nothing more than an engagement in a dogmatic battle contested mainly between the ruling Islamist Justice and Development Party’s conservative discourse and the liberalism-influenced movement represented in Authenticity and Modernity Party. None of them reflects in depth a true understanding of the ideas they hold to or realize how catastrophically they submerge in a false, stagnant, blatant, manipulative and populistic paradigm in politics.

In a more persuasive way, the idea is to constitute a legitimate trend of thinking in politics and realize a responsible code of democratic knowledge away from the emotional allegiance so elections can meet the rising expectations of people of a true democracy. This requires a great work of analysis mainly from the intelligentsia to escape the current dogmatic trends. Moroccan elections turned out to be a sort of confrontation between two disfigured sociocultural and political oratories. We are dealing with a dogmatic affiliated war rather than a true political contest. Besides, the ideas provoked were mainly emotional, lack intellectual credibility, and contradict the true spirit of democracy. What is worse is that the whole things happened in a corrupted milieu. With all this mess, one cannot help dreaming of a painless death, of a deliberate ending of all this suffering.

Moroccan democracy tears down my insides so that no matter what I say or how I euphemistically fool myself with words; with vague or mild substitutes for what is truly offensive and harsh, one has few fragmentary evidences to prove the opposite. Moroccan politics has it all: debased ideologies, depravity, deception and moral perversion. Ultimately, in the absence of what is a solid, true and reasonable idea, fragility, immaturity and irrationality prevail.

It is obvious enough that the talk on democracy in Morocco remains a delusional subject since it does not address the main and vital challenges society faces, fails to offer a reasonable glimpse into its real problems and neglects to investigate the many issues plaguing the country. One speech chains to another and none speak out of a reality. The whole current debate still favors hesitation, lagging and evasion, and relies most on a pragmatic ideology serving no benefit or goal to democracy. Serious things like unemployment, national debt, security and schooling’s predicament are left behind…

At this very exact moment, if Friday’s parliamentary elections served any objective, it should be a warning to all of us that the current political rhetoric is so dangerous to arise more than a single warning. It dramatically privileges hatred over love, confrontation over solidarity, intolerance over acceptance and separation over unity.

PAM sticks to an exclusive rhetoric in the name of societal, cultural and political modernization; a rhetoric nurturing from old narratives about Islam and builds upon the many ready-made ideological assumptions angered in the voice of so many public figures including the Secretary General of PAM himself Mr. Ilyas El Omary. On October, 2, 2016, El Omary told the Associated Press that the Islamist’ government is “responsible for allowing the radicalization of Moroccan youth, especially in the northern region of Morocco.” Given by these false assumptions, such an act of rhetorical platitude should only be seen as an unjustified assault on Islam and should certainly bring about instability and division.

If Ilyas El Omary talks from a modernist backgrounds, we may have to remind him once and for all that modernity has never been an exclusionary project, but a philosophy of systematic and rational containment. The true battlefield of Modernism has always been located somewhere in the middle of the advancement of freethinking and the advent of true societal change. We may have to remind his supporters as well of Marshall G.S. Hodgson’s idea that “the serious reader must be prepared to think in novel ways[…] Otherwise, he will receive an impression of exotic quaintness, romance, or incongruity which does no justice to the human reality.”

Evidently, Moroccans are still doubtful and skeptical of their preferences; modernity vs tradition, rationalism vs spirituality, theocracy vs civil state. What matters most during these difficult times is the awareness of this horrifying trap by resisting its seductive and divisive narrative. Islam is a penetrative force in Moroccan society and so are its values, ideas and practices. Falling prey to the terminologies, whether Islam is suitable or not, useful or superfluous, is destructive and inharmonious. Unfortunately, what is being exposed in recent public debates is totally disfigured, disoriented and misleading – definitely not a priority. At the end, all knowledge -even of politics- rests upon interpretation” and we have to be alert enough to interpret things in the most proper manner. That is not to lock ourselves within apparatus of false ideas and biased conceptions.

Meanwhile, we have to remind the activists and supporters of PJD that the questions on Islam were and are still relevantly immemorial and leaping at the possibility of crushing every single call for reform is useless. Every time, the issue is raised, the public will react and engage. We know that there are so many disfigured realities out there and it is about time to engage in a process of change. Not only at the level of the political conservative discourse, but also in thought and the cultural reservoirs from which these discourses feed.

The islamists may be wringing their hands in joy as their components predicament is deepening -at least, on social media platforms. Again, they should know once and for all that relying mostly on an offensive and aggressive emotional allegiance will fail. What PJD achieved may be a cause for celebration for some of us. After the party is over, however, we will wake up with a new headache, a serious one that may inflict serious pain to the fabric of society in the long term. The “integrity-filled and clean campaign” that Abdelilah Benkirane proclaims is over now and so is the platitude of their components’ political oratories. The question is what is next?

Of course, both sides need to advocate more passion towards channeling new directives in Moroccan politics including the so-called political Islam movement. If there is no absolute validity, then struggles or disputes over these movement’ religiosity will continue to emerge.

Today, Morocco’s moderate Islamists have beaten their rivals, and have all the right to celebrate. Tomorrow, they will wake up with their limited powers. The authorities the king devolved to the government following the protests for democratic change in 2011 are not yet decisive or impressive to declare or proclaim a victory.