Casablanca - Millions of social media users in Morocco and elsewhere have praised the pictures of King Mohammed VI visiting former Moroccan Prime Minister, Abderrahmane Youssoufi, in a Casablanca hospital and kissing him on the forehead. 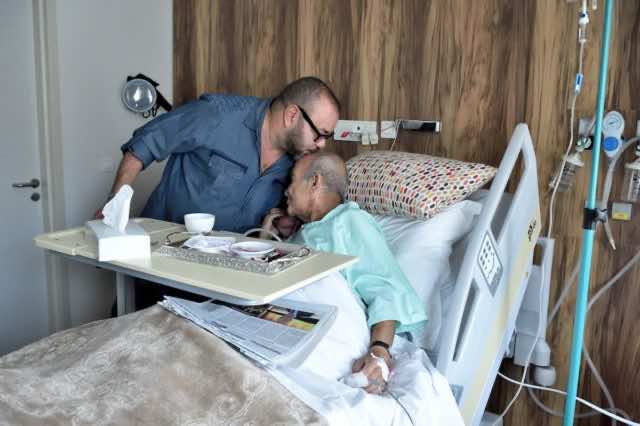 Casablanca – Millions of social media users in Morocco and elsewhere have praised the pictures of King Mohammed VI visiting former Moroccan Prime Minister, Abderrahmane Youssoufi, in a Casablanca hospital and kissing him on the forehead.

As soon as King Mohammed VI heard about Abderrahmane Youssoufi’s failing health, he immediately took him to Halifat Hospital in Casablanca. This noble gesture, however, has paled compared to his visit to the iconic figure of Moroccan politics, and the kiss he gave him on the forehead.

As the photos of the monarch bowing down to kiss someone’s forehead for the first time went viral, Moroccan social media users expressed their appreciation of this act of humility for a revered politician. Commenters on the Morocco World News Facebook fan page have all praised the King’s humility and thanked him for the move.

One commenter said, “A king bows down to kiss the forehead of a sick man. Such humility!” Meanwhile, another one stated, “I am privileged to live here as a guest of a country with such a compassionate and wise king.”

News sources outside of Morocco also published the photos of the Moroccan monarch kissing Youssoufi’s forehead. An article by the Arabic language news source, Arabi21, which was shared by the prominent Aljazeera TV anchor, Faisal al-Qassem on his Facebook fan page, received 21,000 likes and almost a thousand shares in one day.

One of the thousands of Arab commenters stated, “A modest and intelligent King, he knew how to lead a gradual change and reform in Morocco after the Arab Spring without a revolution or bloodshed.”

A Libyan commenter said, “A tribute of thanks and appreciation to the Moroccan people and His Majesty King Mohammed VI. We went to Morocco from Libya for our doctoral studies in Moroccan universities for free.”

The photos also served as an opportunity to invoke the immense sacrifices that Abderrahmane Youssoufi made as the head of the government between 1998 and 2002 at a critical transition in Morocco’s history.

Youssoufi, former leader of the party of Socialist Union of Popular Forces (USFP), and one of the icons of Morocco’s resistance to French colonialism, is regarded as one of the most respected political leaders in the country’s history.