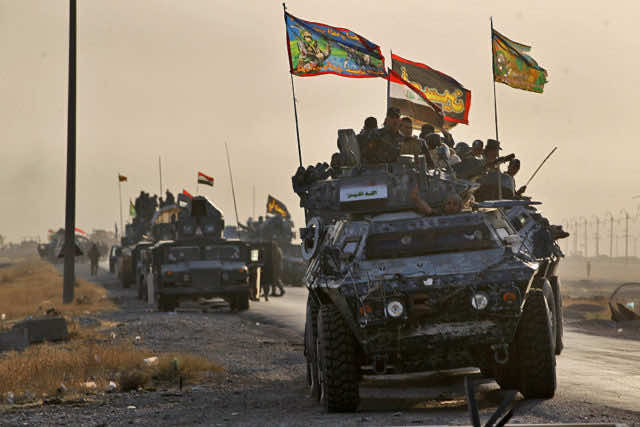 Rabat – Iraqi Coalition forces mobilized on Monday to reclaim the city of Mosul which has been held by ISIS for approximately two years.

The attempt to retake Mosul, Iraq is spearheaded by Iraqi forces and Kurdish Peshmerga troops. According to Aljazeera, the coalition forces have reclaimed, “A 200 sq. km area around Mosul from the Islamic Stat of Iraq and the Levant”. The joint operation on Mosul has been launched from the south and east of Mosul.

The coalition forces outnumber ISIS fighters approximately five to one. US military officials have estimated up to 5,000 ISIS fighters, with sources close to the terrorist group saying that numbers are closer to 7,000. CNN reports that the coalition forces number as much as 100,000 and includes, “54,000 members of the Iraqi Security Forces and 40,000 Kurdish Peshmerga fighters”. These forces are supplemented by 14,000 members of paramilitary units; 9,000 Sunni fighters and 5,000 from other minorities.

U.S. troops have aided the coalition with airstrikes and intelligence support. In an interview with Aljazeera, Colonel John Dorrian stated:

“We do provide our intelligence capability, we provide our logistics, these are capabilities that the coalition has that are singularly distinctive. We are very capable in these areas, and it is a big help to the Iraqis as they move into position,”

Convoys moving on the city have encountered suicide bombers and improvised explosive devices in the surrounding villages. Militants have lit oil filled trenches to obscure fighters’ positions from airstrikes, which have remained effective tools on the outside of the city. Once the fighting has moved to the tight city streets, airstrikes will have reduced effectiveness.

At least five Peshmerga soldiers and one Iraqi soldier were killed in the operation on Monday. US military officials expect the battle for Mosul to last months.