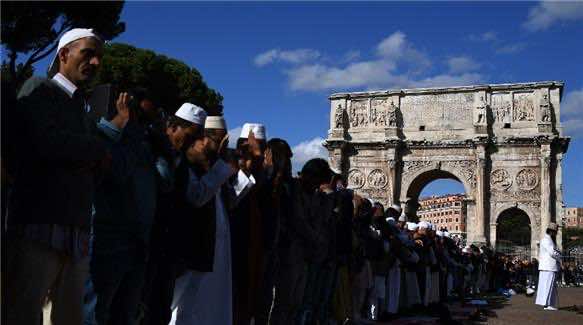 The Dhuumcatu, a Bangladeshi group in Italy, organized a prayer demonstration attended by hundreds of Muslims near Rome’s famous ancient amphitheater. According to an interview with Aljazeera English, worshipers performed the prayer and held placards reading “Peace” and “Open the mosques.”

Protest organizers denounced the Italian authorities’ restriction of freedom of worship in Italy after five makeshift mosques were closed on administrative grounds.

Italian Muslims see the act as an “unwarranted and hostile” reaction against them following the terrorist attacks in Europe this year, citing “trivial” pretexts for closing the mosques, such as the number of toilets.

A Muslim convert, Francesco Tieri, is quoted in the same source as saying:

“There is no political will to recognize that we are here and that we are a peaceful community. We are forced to rent places to pray – which for us is like breathing air. If we can’t do it, we die.”

Tieri, who serves as coordinator for several Islamic groups, was also quoted as saying, “We feel people are pointing the finger at us.”

Police said that it had shut down mosques and added that freedom of thought in Italy is granted, but within a specific legal space.

Barbara Saltamartini, political member of the Italian anti-immigration Northern League party, said that the Friday Prayer demonstration was “an unacceptable provocation” that should have been suppressed.