Rabat – The Judiciary police of the northern city of Tetouan carried out Monday a search of the house of a wanted person and seized 430 grams of cocaine and 90 grams of hashish, said Tuesday a statement by the national police (DGSN). 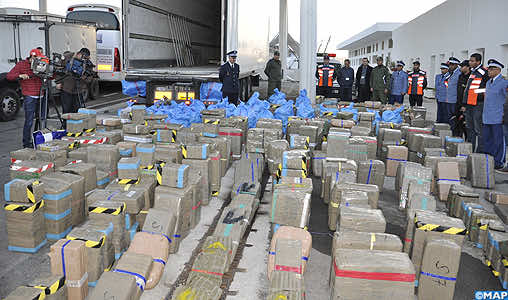 Rabat – The Judiciary police of the northern city of Tetouan carried out Monday a search of the house of a wanted person and seized 430 grams of cocaine and 90 grams of hashish, said Tuesday a statement by the national police (DGSN).

The police also seized three cars with false plates and a sum of 86,350 dirhams, the statement added.

Investigations led to the arrest of the brother of the wanted person, aged 33, for his alleged involvement in these criminal activities. He was remanded in custody to complete the investigation led under the supervision of the public prosecutor’s office.

Investigations are still underway to arrest the main suspect, the statement said.