Rabat - In a leaked video to the British newspaper “The Sun” the British gymnast was videoed mocking Islam. 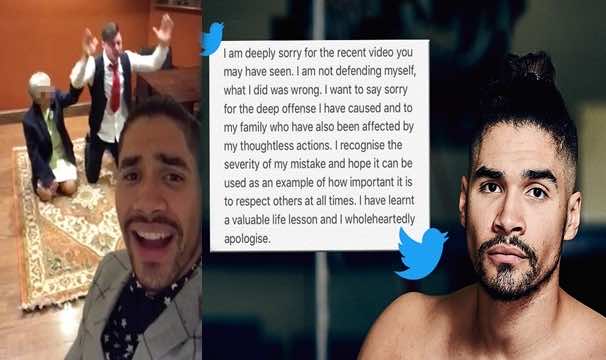 By
Hinna Sheikh
-
Hinna Sheikh is an undergraduate student of Arabic and International Relations at the University of Leeds in the United Kingdom.
Oct 26, 2016
Spread the love

Rabat – In a leaked video to the British newspaper “The Sun” the British gymnast was videoed mocking Islam.

The 3-time Olympic medallist chanted “Allahu Akbar” whilst in a drunken state.

He was not alone, however, in this mockery. The now retired gymnast, Luke Carson, was seen pretending to take a rug from the wall to perform his “six o’clock prayers”.

The video did not end there, the pair further videoed themselves talking about “60 virgins.” A passer-by reprimanded the pair, commenting: “You’re not funny…you’re taking the p**s actually.” The 27-year-old gymnast responded, “Yes it is,” and then carried on filming.

Their actions have been widely criticised on social media, with some Twitter users even joking that his comments made him ripe for the position of leader for UKIP.

36 hours after the incident Smith took to Twitter to issue an apology which read:

“I am deeply sorry for the recent video you may have seen. I am not defending myself, what I did was wrong. I want to say sorry for the deep offence I have caused and to my family who have also been affected by my thoughtless actions. I recognise the severity of my mistake and hope it can be used as an example of how important it is to respect others at all times. I have learnt a valuable life lesson and I wholeheartedly apologise” – @louissmith1989

His actions have not gone unnoticed by British Gymnastics who were “appalled” by Smith’s behaviour, they furthered pledged to investigate the allegations made against the gymnasts. They further added that any members who violate the code of conduct could face expulsion from the organisation.

The organisation has concluded its investigation and will present their findings this week. Smith’s punishment could range from a fine, to suspension or even a permanent ban from the team.

After the incident, Smith has worked to do some damage control, taking to the chat show “Loose Women”, where he was criticised for his actions but also heralded as brave for confronting the situation.

He further told BBC Radio Five Live that he has received death threats since the video has been posted.

In order to try and rebuild relations with the Muslim community, Smith accepted invitations to two mosques in London instead of joining his fellow Olympic athletes at a celebration event to mark their achievements at the Rio 2016 Olympic Games.