The plan, which he calls his contract between himself and the American voter, includes his promises to restore “honesty and accountability” and bring “change to Washington.” His plans consist of imposing term limits on Congress, cancelling payments to U.N. climate change programs and using the money to fix America’s environmental infrastructure. Trump also wants to work with Congress to withdraw from the Trans-Pacific Partnership, cut taxes for the middle class, repeal Obamacare and more.

On Wednesday, Senate Majority Leader Mitch McConnell had a mostly congratulatory tone when discussing the president-elect, but he shot down Trump’s proposal to impose term limits on Congress by saying, “It will not be on the agenda in the Senate.”

Trump included in the action plan his controversial intention to “fully-fund the construction of a wall on our southern border with the full understanding Mexico will be reimbursing the United States for the full cost of such wall.” During President Obama’s tenure, numerous executive orders to deal with immigration concerns, including slowing deportations for some while creating avenues for undocumented immigrants to obtain legal status, were issued. Mr. Trump can make those measures all go away, said McConnell.

“One of the things I hope the new president — he mentioned this during the campaign — will do is take a look at all the unilateral actions that the president took, both through executive orders and regulatory overreach of one kind or another,” McConnell said, stating that he wanted to achieve border security in whatever way was most effective. He declined to discuss the Senate’s immigration stance further.

Mr. Trump also vowed to repeal and replace Obamacare, but critics say that doing so is easier said than done. Repealing Obama’s Affordable Care Act will be a challenge, considering that Republican lawmakers hold 51 seats in the Senate at latest count, short of the 60 seats required to overturn the law. However, McConnell said on Wednesday that repealing Obamacare is a “pretty high item on our agenda” for Congress.

“It is the single worst piece of legislation among many bad pieces of legislation passed in the first two years of the Obama presidency. The sooner we can go in a different direction, the better,” McConnell said.

Only time will tell if Mr. Trump will be able to accomplish his goals in his first 100 days of office. You can read the entirety of his action plan here. 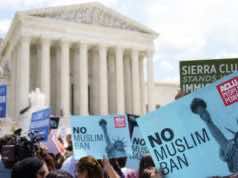