Casablanca - The General Directorate of National Security (DGSN) refutes allegations made in the November 7 statement made by the Dignity Forum of Human Rights on the Mouhcine Fikri case.

Casablanca – The General Directorate of National Security (DGSN) refutes allegations made in the November 7 statement made by the Dignity Forum of Human Rights on the Mouhcine Fikri case.

The Dignity Forum of Human Rights stated on Monday that the officials who confiscated Mohcine Fikri’s merchandise and summoned the garbage truck that ultimately crushed him,“disregarded official criminal procedure, the Royal Decree that regulates fishing, the Highway Code, and the health and safety laws pertaining to food products.”

The communiqué also called upon authorities to guarantee transparency and quickly reveal the results of the investigation to the public. In addition, it demanded the establishment of communication channels between the Ministry of Interior and human rights organizations.

In reaction to the statement from the Dignity Forum of Human Rights, the General Directorate of National Security (DGSN) released a statement on Tuesday “to ward off all ambiguities that may be caused by inaccurate allegations.”

The DGSN’s communiqué in response asserts that the Dignity Forum of Human Rights “addressed the mission of the officers in an imprecise way.”

“The national security officials in the city of Hoceima,” “stopped the driver of the car, which was loaded with the fish and owned by the defunct, and dealt with him as law-breaker. This required an immediate notification of the specialized public prosecutor with the observations and the procedures undertaken.”

The DGSN response added that “the public prosecutor ordered that a written report of the confiscated fish, the truck and the driver be sent to the Regional Delegate for Fishing. The delegate should take legal steps pursuant to the requirements of articles 18 and 23 of the Code of Criminal Procedure, and chapters 43, 46, 47 and 48 of the Dahir of Shawal 23, 1393 corresponding to November 23, 1973 related to organizing fishing, which was later signed, amended and supplemented.”

The role of the Directorate General of National Security “was limited to the aforementioned procedures, which targeted the driver of the car loaded with fish as he breaking the national legislation.”

The communiqué adds that Directorate General of National Security did not call for “destroying the merchandize or beginning the prosecution, because this is the role of other committees.” 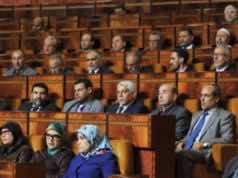