Casablanca —  The COP22 international climate change conference held in Marrakech this week witnessed the signature of an agreement between Gabon and Equatorial Guinea with regards to their territorial boundaries. 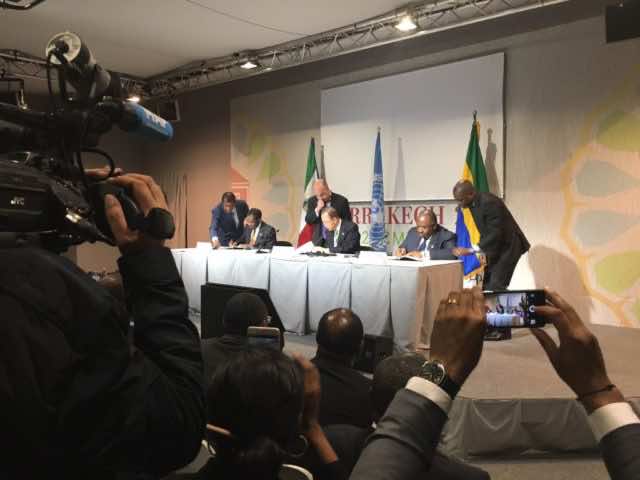 Casablanca —  The COP22 international climate change conference held in Marrakech this week witnessed the signature of an agreement between Gabon and Equatorial Guinea with regards to their territorial boundaries.

The historic Gabon-Guinea agreement, which was signed on Tuesday, November 15, resolves a 30-year border dispute between the two countries.

In the agreement, both countries have agreed to submit their dispute over to the International Court of Justice. The two Central African neighbors had been in disagreement over several islands in the Gulf of Guinea, with both countries claiming right over the oil-rich territories.

At the signing ceremony, UN Secretary-General Ban Ki-moon said, he commends “President Obiang Nguema Mbasogo [of Equatorial Guinea] and President Bongo Ondimba [of the Gabonese Republic] for demonstrating true political leadership, courage and wisdom in reaching this mutually acceptable agreement, in accordance with the spirit and letter of the United Nations Charter.”

“It is my sincere hope that your commendable efforts will be a source of inspiration for countries around the world facing similar challenges,” the Secretary General added.

This successful mediation solidifies Morocco important position in Africa and furthers the nation’s efforts in reintegrating the African Union.