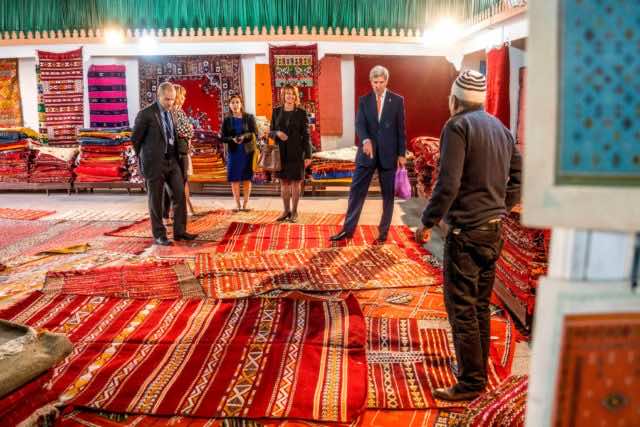 During his visit to Morocco to take part in the UN Conference for Climate Change COP22 in Marrakech, John Kerry, US Secretary of State, met with King Mohammed VI and visited the city’s famous bazaar.

The US Secretary of State held a private meeting with King Mohammed VI during his visit to the COP22 summit held in Marrakech between November 7 and 18.

The US official made a statement to the press following the meeting with the King and stated that the meeting was “very comprehensive and very positive.”

“President Barack Obama and I are grateful for the quality of the relationship we have with His Majesty, Morocco and the government,” he said.

Regarding Morocco’s organization of COP22, Secretary Kerry said that “Morocco did a wonderful job.”

The 22nd session of the UN conference in Marrakech, would result in a “strong declaration, which enshrines the Paris Agreement on climate,” Kerry added.

The American diplomat seized the opportunity to visit the famous bazaar area in Marrakech. The US Embassy in Rabat posted photos on Facebook of the US official in many antiquity boutiques. The caption with the photos states, “Everyone admires Moroccan handicrafts, including US Secretary of State John Kerry and Ambassador Bush.”

The caption also shows that the US Department of Commerce and Morocco’s Ministry of Crafts are currently working together to promote Moroccan artists in the framework of the Free Trade Agreement (FTA) between the two countries.

The Free Trade Agreement between the United States and Morocco was signed on June 16, 2004 and became effective in 2006. The Morocco-US FTA aims at increasing the bilateral commercial exchange between the two countries by eliminating trade barriers.

Kerry to pay first visits to Algeria and Morocco