Casablanca — A video recently shared on social media shows the plight of a mother who, having just lost her bag containing important medicine for her son, asks for everybody’s help.

By
Ghita Benslimane
-
Ghita is a Moroccan native and a graduate of Boston University’s Film and Television program.
Nov 20, 2016
Spread the love

Casablanca — A video recently shared on social media shows the plight of a mother who, having just lost her bag containing important medicine for her son, asks for everybody’s help.

Thankfully, due to the generosity of a number of social media users, the worried mother, who is named Hadoume Zarouata but primarily goes by Somiya, was able to raise enough money to replace the lost medicine, reports Le360.

In the video, the woman says she forgot a brown bag at the Ain Sebaâ train station. The bag contained important medication called “Tasigna” (200mg) that she had just purchased for her 28-year-old son who suffers from leukemia.

In her plea for help, the woman explains how her son’s father had borrowed the money to pay for the medicine, which he will need after an upcoming surgery.

The woman filming the video on site is Bouchra Fiddi Azmi, who shared the video across social media and urged viewers to donate any money they can and to keep sharing the post. 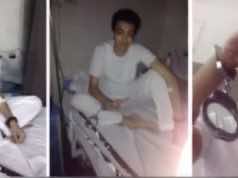 Shocking Story of Egyptian Man Who Picked up Leukemia in Prison