Marrakech – Princess Lalla Meryem, chairwoman of the National Observatory of the Child's Rights (ONDE), chaired, on Sunday in Marrakech, the 15th National Congress of the Child’s Rights, held under the patronage of King Mohammed VI, on the Universal Children Day. 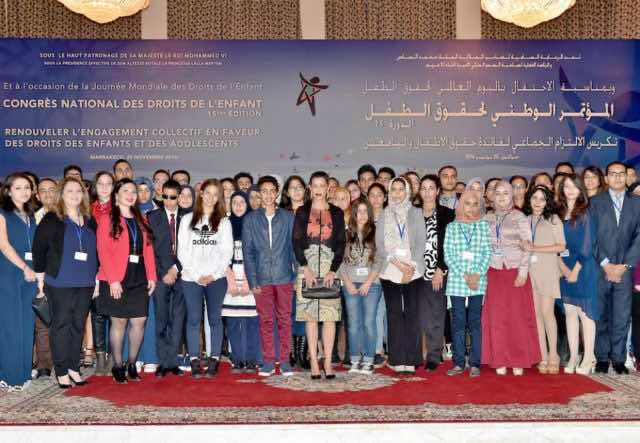 The opening ceremony of the National Congress started with the reading of Quranic verses, followed by the playing of the national anthem.

Subsequently, a welcoming speech was given by Lina Oudghiri, on behalf of the ONDE, followed by a video on the importance and objectives of the congress.

The statements were unanimous in praising the commitment of Morocco to achieving the objectives of sustainable development and the effective involvement of Princess Lalla Meryem in promoting the rights of children and women.

The ceremony also featured the screening of a film on a System for reporting and defending children victims of violence, exploitation and neglect, and the presentation of a project entitled “Foster families for abandoned children.”

Later on, Princess Lalla Meryem officially kicked off the System for reporting and defending children victims of violence, exploitation and neglect, and distributed the necessary equipment to facilitate the task of the contributors to this initiative (lawyers, psychiatrists, pediatricians, assistants and social workers).

Upon her arrival at the Marrakech convention center, Princess Lalla Meryem reviewed a detachment of the Municipal Guard, which made the honors, before being greeted by minister of Justice and Freedom, Mustapha Ramid, secretary general of the Government, Driss Dahak, minister of Health, El Hossein El Ouardi, and minister of Solidarity, Women, Family and Social Development, Bassima Hakkaoui.