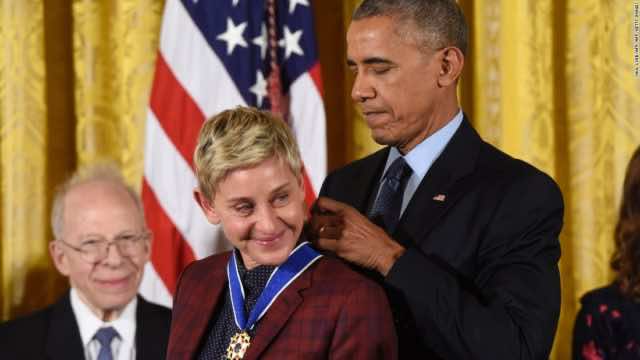 Among them was actor, comedian, and television talk show host Ellen DeGeneres.

Ellen came out publicly as a lesbian in 1997, and has since been one of the most visible advocates for the LGBT community. According to the Huffington Post, President Obama praised Ellen for her bravery during the award ceremony.

“It’s easy to forget now, when we’ve come so far, where now marriage is equal under the law, just how much courage was required for Ellen to come out on the most public of stages almost 20 years ago.”

The ceremony was emotional for both DeGeneres and President Obama, who got “choked up” midway through his speech.

“What an incredible burden that was to bear – to risk your career like that – people don’t do that very often,” he said. “And then, to have the hopes of millions on your shoulders.”

The Medial of Freedom is the nation’s highest civilian honor, and is presented to people who have made especially significant contributions to the security or national interests of the U.S., to world peace, or to cultural or other developments.

Lebanon: A Tale of Leaps and Losses for LGBT Rights