In an interview with the Portuguese broadcaster RTP, Egyptian president Abdelfattah Al-Sisi is expressing support for Bashar Alassad’s regime in Syria. 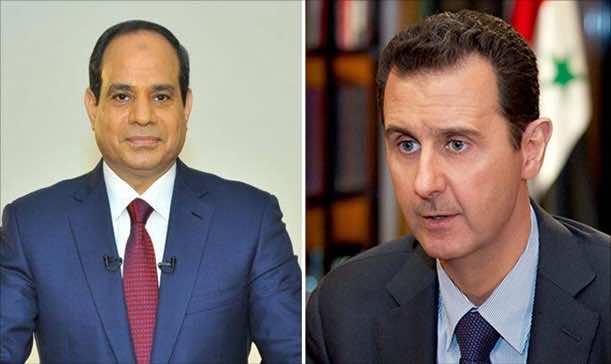 In an interview with the Portuguese broadcaster RTP, Egyptian president Abdelfattah Al-Sisi is expressing support for Bashar Alassad’s regime in Syria.

Amid the unprecedented state of tension between Egypt and Gulf countries, especially Saudi Arabia, the Egyptian president is continuing to demonstrate a hostile position against these countries by supporting their enemy in Syria.

During his interview with RTP, Al-Sisi was asked if Egypt would consider a UN peacekeeping role in Syria, to which Al-Sisi responded:

“Our priority is to support national armies, for example in Libya to assert control over Libyan territories and deal with extremist elements. The same with Syria and Iraq.”

The interviewer then asked if his support extended to Syria and Al-Sisi responded positively. The Egyptian President said that the solution to the conflict in Syria must be resolved politically:

“Our stance in Egypt is to respect the will of the Syrian people… and that a political solution to the Syrian crisis is the most suitable way… and to seriously deal with terrorist groups and disarm them,” he stated.

Egypt voted for a Russian-authored UN Security Council resolution last September allowing Russia to continue its airstrikes on the Syrian city of Aleppo. The Permanent Representative of Saudi Arabia to the United Nations said that Egypt’s vote is “painful.” Tensions between Cairo and Riyadh escalated, leading to an abrupt suspension of Saudi supply of petroleum to Egypt.

Egypt, in turn, responded by reviving its ties with Saudi Arabia’s regional enemy, Iran and publicly supporting Bashar’s regime in Syria, the regime that Saudi Arabia and other Gulf countries have been trying to oust by backing the rebels.