Morocco World News
Home Opinion Is There a Link Between Traffic Accidents and Corruption?

Rabat - Sadly, it is coming commonplace that we are setting new records for traffic accidents, resulting in fatalities and casualties. Each time I hear the news, I get seized with uncontrollable feelings of bitterness, confusion, and anger. Every year, the tragedy worsens compared to the previous year.  I ask myself, are we trying to win a trophy for the deadliest traffic accidents in the world? How we did end up in here, who is to blame, do we really want to own such a dubious distinction? 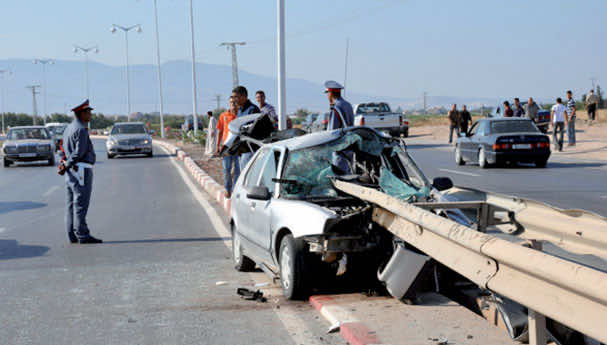 By
Zineb Raji
-
Zineb Raji was born in Azrou, Morocco and obtained her bachelor degree in International Studies with a minor in Communication Studies from Al Akhawayn University in Ifrane.
Nov 27, 2016
Spread the love

Rabat – Sadly, it is coming commonplace that we are setting new records for traffic accidents, resulting in fatalities and casualties. Each time I hear the news, I get seized with uncontrollable feelings of bitterness, confusion, and anger. Every year, the tragedy worsens compared to the previous year.  I ask myself, are we trying to win a trophy for the deadliest traffic accidents in the world? How we did end up in here, who is to blame, do we really want to own such a dubious distinction?

So far, we cannot find effective means with which to fight this battle and no hard or soft law seems able get its teeth into the problem. On the contrary, as laws combating traffic accidents are filling the law books, the scale and severity of such accidents is increasing exponentially. It seems that these laws come to exist, in large parts, just to shift accountability to the unknown and to find no person to point the finger at. I see these laws as akin to bailing out a sinking ship with a teaspoon. There seems to be no genuine will to enforce these laws and empower them. A real solution to this problem is there, concealed in the existing gap between the law itself and what stands behind its effective implementation; corruption. Until this link is effectively broken, these laws will always be futile and may even result in the very real possibility of making the situation worse.

Corruption is a major obstacle to law enforcement.  Certainly, it is an obstacle to achieving progress in lessening the number and severity of traffic accidents in Morocco and to which numerous social and economic problems are traced directly or indirectly. However, either we fail to gain a higher vantage point from which we can see and understand the link between growth and corruption or, we intentionally turn a blind eye to avoid a serious debate about the major perpetrators who benefit from such a corrupt system.

To the extent that we do not recognize and work out the real problem, we will forever remain trapped in a defective, corrupted system that manifests itself in every aspect of our life and in the most basic ways. Corruption is the hallmark of a self-destructive society that is befuddled by falsehood. It is not by chance that we have reached this alarming stage of traffic accidents; it is because circumventing laws has become the norm, aside from our tendency to opt for quick fixes and shortcuts. Traffic rules are respected at the convenience of everyone and the concepts of incentive and punishment are no longer working because corruption opens impunity doors in every direction. Even selective enforcement would indicate that the powerless and vulnerable citizens are at a big disadvantage in a country where all citizens are not treated equally before the law.

Either motivated by greed, the need to meet basic life necessities or other factors, corruption has become so systematic and its social costs are so high. Traffic accidents reflect the gravity and extent of our failure to fix this problem because we are only scratching at the surface. In fact, all debates about the need for more traffic laws, the need to repair dangerous and defective roads, intricate transport system and how to combat undesirable driving behaviors are irrelevant in a context where corruption flexes a strong grip. All implicated institutions, public and private establishments, are complicit in the traffic crimes we witness every day.

One can rightfully ask, how long can this corrupt system stand? And for how long we can pretend to accept that things should be this way because there is nothing else that can be done? And, will it someday, be possible, to enjoy what is called good governance in our country? At this stage, we are far away from reaching this goal and traffic accidents are only one of the most terrible results of this corrupt system.  All  other social and economic problems represent only the tip of the iceberg; the problem is so much more intricate and insidious. To alleviate its intensity and eventually solve it, we must dig deeper to understand it first, in order to bring light its deepest, darkest, and most complicated roots. Once we can treat every social, economic, political and cultural ailment caused by corruption, we will be able to change all aspects of our life in positive, lasting ways. Otherwise, as time is moving fast and it is impossible to maintain the status-quo, we will definitely move to a more inhuman, chaotic and corrupt life.  At some point it will become uncontrollable and too late to take seriously.

The prevention of corruption needs to become a top priority in the development agenda of our country. Corruption will not go away by itself, no matter how hard and honest we wish for that. Instead, we must stare this problem in the eye and focus on it as the number one impediment to our progress. Currently, we have a huge gap in research and analysis over the underlying causes and consequences of corruption in the most impacted aspects of our life. With close follow-up and genuine interest, we can develop tailored approaches to fight the root problems of corruption. Let’s admit it; corruption is a very hard problem that has persisted for so long that it has become a way of life. To fight it requires strong determination and a willingness to stand against the proponents of corruption. There is no other way forward.