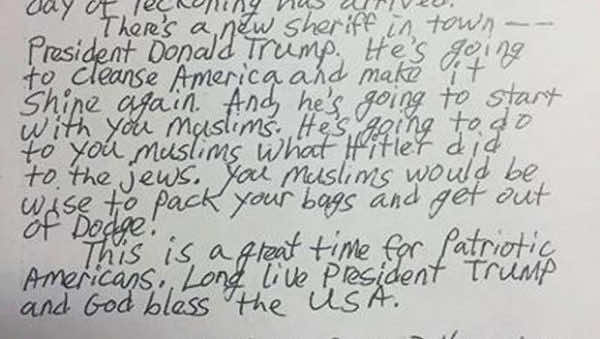 Donald Trump’s rise to power has been accompanied by a rise in hate crimes against religious and ethnic minorities in the US. The Southern Poverty Law Center (SPLC), a non-profit organization that fights hate and intolerance in the US, has recorded 700 cases of intimidation and harassment against minorities across America.

Muslims in the US have also been targeted in a number of physical attacks. Only last week so-called nationalists assaulted a Moroccan expatriate in New York city, merely because he looked Arab. Now, Islamic Centers and a mosque in California have received photocopies of handwritten letters attacking Muslims and promising ethnic cleansing.

The letters were signed, “Americans for Better Way” and were sent to multiple Islamic institutions throughout over the course of a week. They refer to Muslims as “a vile a filthy people” whose “mothers are [expletive] and fathers are dogs” and who “worship the devil.”

The hate-filled letters continue to predict that the President-elect will lead a genocide against Muslim Americans, as Hitler once cleansed Germany of the Jews in the 1930’s:

“There’s a new sheriff in town — President Donald Trump. He’s going to cleanse America and make it shine again. And he’s going to start with you Muslims,” the letters read. “He’s going to do to you Muslims what Hitler did to the Jews.”

According to the Huffington Post, the menacing tone and content of the letter urged the Council on American-Islamic Relations (CAIR) to release a statement calling on the police to increase protection. In the statement CAIR-SFBA Executive Director, Zahra Billoo, stated:

“We urge local law enforcement authorities to work with Muslim community leaders to ensure the safety of all houses of worship. Our state’s political and religious leaders need to speak out against the mainstreaming of Islamophobia that we are witnessing in California and nationwide.”

The Islamic organization initially abstained from reporting the letter but decided to go public when it became clear that the letters were being sent to other religious centres as well.