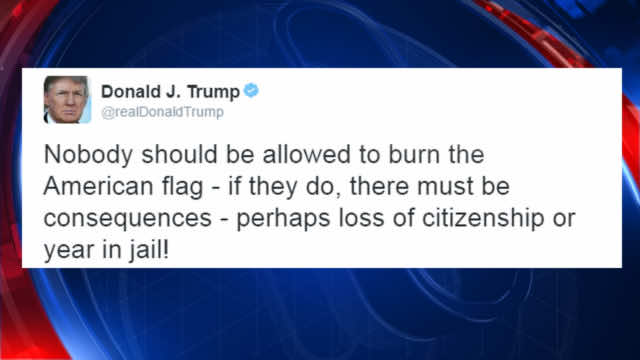 Rabat – U.S. President-elect Donald Trump took to Twitter on Tuesday to propose penalties – including loss of citizenship and possible jail time – for protesters who burn the American flag.

“Nobody should be allowed to burn the American flag – if they do, there must be consequences – perhaps loss of citizenship or year in jail!” Trump tweeted.

The U.S. Supreme Court has twice affirmed that flag desecration is a constitutionally protected form of free speech. The court, in a 5-4 decision on the 1989 “Texas v. Johnson” case, ruled that flag burning was a form of “symbolic speech” protected by the First Amendment. The following year, in “United States v. Eichman,” the court again affirmed the right to burn the flag when it ruled that the Flag Protection Act of 1989 – passed by Congress in response to the Johnson decision – was unconstitutional. Also, a 1958 Supreme Court decision declared that stripping U.S. citizenship as a form of criminal punishment was unlawful.

During a television appearance on MSNBC’s “Morning Joe” shortly after Trump’s tweet, House Majority Leader Kevin McCarthy said that even though he disagreed with flag burning, Americans still have First Amendment rights.

Trump transition spokesman Jason Miller failed to address the constitutionality of his boss’s stance when questioned on CNN.

“Flag burning should be illegal,” he repeated on the network’s “ New Day” program.