Rome  - Italian Prime Minister Matteo Renzi is set to resign on Monday after suffering a crushing defeat on Sunday in a referendum on constitutional reform.His decision to quit after just two and a half years in office deals a blow to the European Union, already reeling from multiple crises and struggling to overcome anti-establishment forces that have battered the Western world this year. 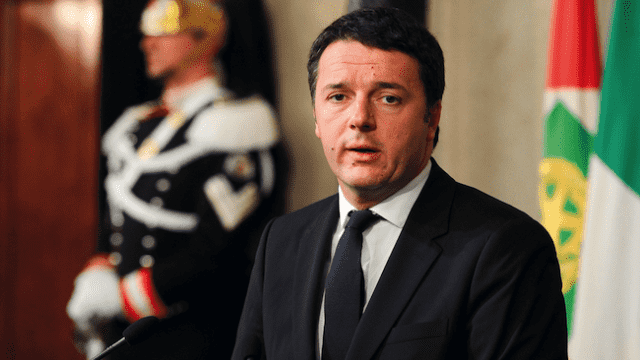 By
Staff Writer
-
Dec 5, 2016
Spread the love
Rome  – Italian Prime Minister Matteo Renzi is set to resign on Monday after suffering a crushing defeat on Sunday in a referendum on constitutional reform.

His decision to quit after just two and a half years in office deals a blow to the European Union, already reeling from multiple crises and struggling to overcome anti-establishment forces that have battered the Western world this year.

The euro briefly tumbled overnight to 20-month lows against the dollar, as markets worried that instability could reignite an EU debt crisis and deal a hammer blow to Italy’s fragile banking sector, especially the troubled Banca Monte dei Paschi di Siena. However, by early in the European morning it had largely rebounded.

Renzi’s resignation could open the door to early elections next year and to the possibility of an anti-euro party, the opposition 5-Star Movement, gaining power in the heart of the single currency. 5-Star campaigned hard for a ‘No’ vote.

“I take full responsibility for the defeat,” Renzi said in a televised address to the nation, adding that he would hand in his formal resignation to President Sergio Mattarella on Monday.

“No” won an overwhelming 59.1 percent of the vote, according to the final count.

About 33 million Italians, or more than two-thirds of eligible voters, cast ballots following months of bitter campaigning that pitted Renzi against all major opposition parties, including the anti-establishment 5-Star. The vote ended months of campaigning for a reform that Renzi had said would bring political stability to Italy — but that opponents said jeopardised democratic checks and balances.

Renzi, 41, took office in 2014 promising to shake up hidebound Italy and presenting himself as an anti-establishment “demolition man” determined to crash through a smothering bureaucracy and reshape creaking institutions.