Rabat - Pressure from the Boycott, Divestment, Sanctions (BDS) movement has forced G4S to sell most of its business assets in Israel and BDS campaigners are calling for a continuation of the boycott. 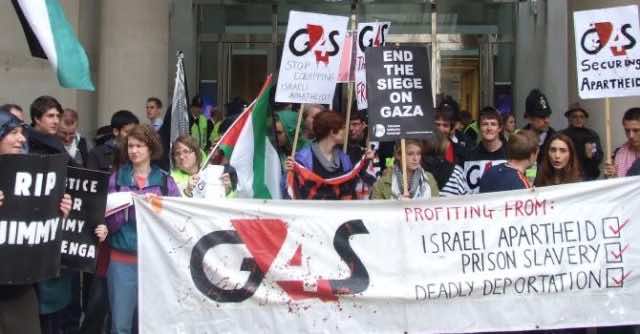 Rabat – Pressure from the Boycott, Divestment, Sanctions (BDS) movement has forced G4S to sell most of its business assets in Israel and BDS campaigners are calling for a continuation of the boycott.

G4S, the world’s largest Security Company that helps Israel run prisons and provides equipment and services for Israeli military checkpoints, made the announcement December 2 that it will sell business interests in Israel.

The decision came after a strong boycotting campaign led by BDS that resulted in the company losing over 48 business deals, costing the British company millions of dollars since 2010.

Rafeef Ziadah, the Palestinian poet and activist who speaks on behalf of the Palestinian BDS National Committee (BNC), commented on the news of G4S’s sale of its subsidiary in Israel, saying:

“We have succeeded to push one of the world’s largest corporations into selling its key business in Israel. Our globally coordinated campaign has had a real impact. We will continue campaigning until G4S ends all involvement in violations of Palestinian human rights.”

Ziadah continued, highlighting the fact that G4S is still involved in illegal Israeli activities continued, “A domino effect is at play here. Some investment fund managers are recognizing that their fiduciary responsibility obliges them to divest from international and Israeli corporations and banks that are complicit in Israel’s persistent violations of international law.”

Guman Mussa, Arab World Coordinator for the BNC, explained that compelling a successful corporation such as G4S to end its complicity in Israeli human rights violations is an immense achievement for the movement. He added, “BDS is clearly working and other complicit multinationals, like HP and Alstom, should take notice.”

BNC Europe Coordinator, Riya Hassan, also reacted to the news, pointing out that the campaign against G4S and other massive multinationals would carry on until they cut all ties with the apartheid state.

“As in the struggle against apartheid South Africa, BDS pressure against Israel’s regime of occupation, settler-colonialism and apartheid is making some of the world’s most powerful multinationals realize that profiting from Israel’s violations of Palestinian rights is not just unethical and socially-irresponsible. It is downright bad for business as well,” asserted Hassan.