Casablanca — Hundreds have gathered to attend the burial of an Algerian journalist who died while in detention for “offense to the President of the Republic,” according to a statement issued by the French Press Agency (AFP).

Casablanca — Hundreds have gathered to attend the burial of an Algerian journalist who died while in detention for “offense to the President of the Republic,” according to a statement issued by the French Press Agency (AFP).

The death of former journalist Mohamed Tamalt in an Algerian prison this week has made waves across the nation and in the media, with many criticizing the reasons behind his detention.

According to prison authorities, Tamalt died on Sunday in an Algiers hospital from a pulmonary infection. But the journalist had also gone on a hunger strike that lasted for more than three months since the day of his arrest, according to the Human rights Watch (HRW).

Kamel Amarni, the President of the National Union of Algerian Journalists (SNJ), meanwhile, deplores Tamalt’s death. “This dramatic ending could have been avoided,” he tells AFP, “if it weren’t for the zeal with which everything related to the Head of State is sacralized.”

Tamalt’s Facebook account was frequently updated with content criticizing the country’s leaders. Most notably, he posted a poem on Facebook insulting President Bouteflika. The poem, among other posts, would soon be grounds for arrest on June 27. In Algeria, “offending the President of the Republic,” is illegal and and heavily condemned.

Mohamed Tamalt was buried in a cemetery in the Algiers neighborhood of Bachdjaraj where he grew up. 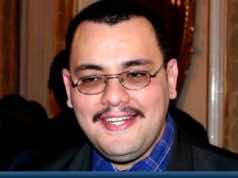 Algerian Journalist Dies While In Detention