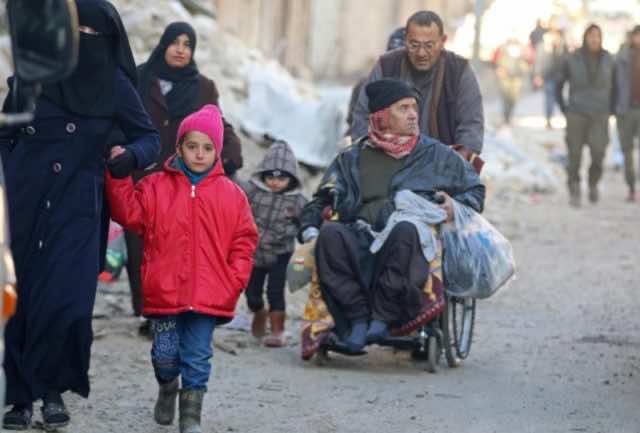 Rabat – Over 4000 civilians have evacuated rebel-held parts of eastern Aleppo, many of these include dozens of orphans.

The evacuation came in spite of the official deferment of movement from the crushed Syrian city. As civilians move to safety, the UN Security Council arrange to vote on whether to send out lookers to monitor the city, with Syria-allied Russia giving wary support to the measure.

However, the endeavour to evacuate the small pockets of eastern Aleppo had given way on Friday, leaving evacuees stranded without access to nourishment and shelter and practically without no medical help.

The process to evacuate resumed late on Sunday and Turkey’s foreign minister has announced that “almost 4,500 civilians had managed to leave eastern Aleppo since Monday, leading to the number of evacuees to 12,000”. United Nations Children Fund, Unicef also confirmed that the 47 children who were constricted in an orphanage have also been taken to safety early Monday morning. Some children are in dire conditions due to severe injuries and dehydration.

Ahmad al Dbis who is the head of coordinating evacuations has said that “Five buses of evacuees arrived from besieged parts of east Aleppo, where civilians were in a terrible state. They hadn’t eaten, they had nothing to drink, the children had caught colds, they were not even able to go to the toilet.”.

The evacuation process has not been easy. On Sunday, armed men had set fire to buses that were ready to transport the injured from the villages to safety. The operation to evacuate has been total chaos, with east Aleppo filled with thousands in their final breaths as the six-year war continues. It likewise underlines how a disintegrated opposition cannot regulate all the components in the battle against the Syrian leadership. Although 12,000 civilians are on the way to safety, many of them remain in the open with little sustenance in the profundities of winter.