Rabat - German authorities are interrogating a 23-year-old Pakistani man for his role in the Christmas market attack on Monday in Berlin, according to multiple reports emerging from the area.

Rabat – German authorities are interrogating a 23-year-old Pakistani man for his role in the Christmas market attack on Monday in Berlin, according to multiple reports emerging from the area.

The police are unsure if the man is the attacker, who drove a truck into a crowded market, killing 12 and injuring almost 50.

Law enforcement is currently working on “high alert” under the assumption that an armed suspect is still on the loose.

Right wing parties, such as the Alternative for Germany (AfD) have blamed Chancellor Angela Merkel for the act due to her welcome of refugees and asylum seekers.

“We see our chancellor being personally responsible for what has happened. We were warning about this,” Beatrix von Storch, an MEP with AfD said, according to The Guardian.

Merkel, who is seeking re-election next year – visited the site of the attack with Berlin Mayor Micheal Muller and Interior Minister Thomas De Maiziere. She laid flowers at the scene to commemorate the lives lost.

The Berlin police department held a press conference on the identity of the suspect and the security protocol in place for visitors of the assaulted market.

The sheer number of Christmas markets in Germany – 2,500 overall, 60 in Berlin – makes it difficult to secure each and every site with stone ballards that would prevent the entrance of a truck in pedestrian-friendly areas, according to Berlin’s police chief.

The authorities said the absence of an online video claiming responsibility for the bloody attack suggests it was a lone wolf effort, rather than sponsored by the Islamic State (ISIS) or another terrorist group. 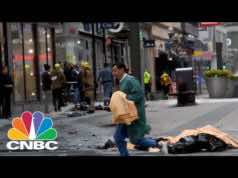 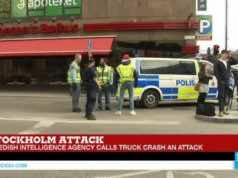