Casablanca — Passengers on the same Delta flight as Adam Saleh and Slim Alabher are now coming forward to rebuke the YouTubers' discrimination claims.

By
Ghita Benslimane
-
Ghita is a Moroccan native and a graduate of Boston University’s Film and Television program.
Dec 23, 2016

Casablanca — Passengers on the same Delta flight as Adam Saleh and Slim Alabher are now coming forward to rebuke the YouTubers’ discrimination claims.

Popular YouTuber Adam Saleh on Wednesday posted a video to Twitter and Facebook claiming he and his friend, Slim Alabher, were being escorted out of a Delta plane for speaking Arabic to each other and on the phone.

We got kicked out of a @Delta airplane because I spoke Arabic to my mom on the phone and with my friend slim… WTFFFFFFFF please spread pic.twitter.com/P5dQCE0qos

The video, which was shared more than 1.7 million times across social media, sparked outrage amongst many, claiming Saleh and Alabher were indeed the victims of discrimination and calling out Delta for their decision to escort the two out.

Meanwhile, many others have discredited the claims as just another one of Saleh’s YouTube pranks.

One passenger on the flight, Anthony Ellis, told The Washington Post that he was seated a row in front of Saleh and Albaher.

“He was never any part on the phone — I would have heard the whole conversation,” Ellis said. “If someone’s being racist, I would stand up right away. In this day in age, you defend each other. It wasn’t like that. I mean, this guy was trying to antagonize people. I think because they made it into such a big scenario, [Saleh] then kind of panicked a little bit.”

Another took to Facebook to explain his version of things, as his boyfriend was on the flight:

Delta, for its part, released a statement on Wednesday explaining the incident, saying:

“Two customers were removed from this flight and later rebooked after a disturbance in the cabin resulted in more than 20 customers expressing their discomfort. We’re conducting a full review to understand what transpired. We are taking allegations of discrimination very seriously; our culture requires treating others with respect.”

In response to both the widespread support and scrutiny, Slim Albaher and Adam Saleh posted a second video on YouTube, after finally landing in New York, detailing their experience:

Whether or not this incident was a hoax, one cannot deny that anti-Muslim acts of discrimination have been on the rise in the United States, especially since Donald Trump’s election to the presidency. 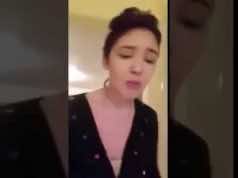 ‘My Country Isn’t Worth Being Jailed For’: Egyptian Vloger 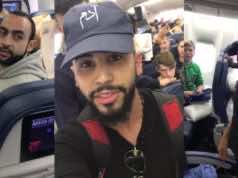 American YouTuber kicked out of Delta Airlines for Speaking Arabic